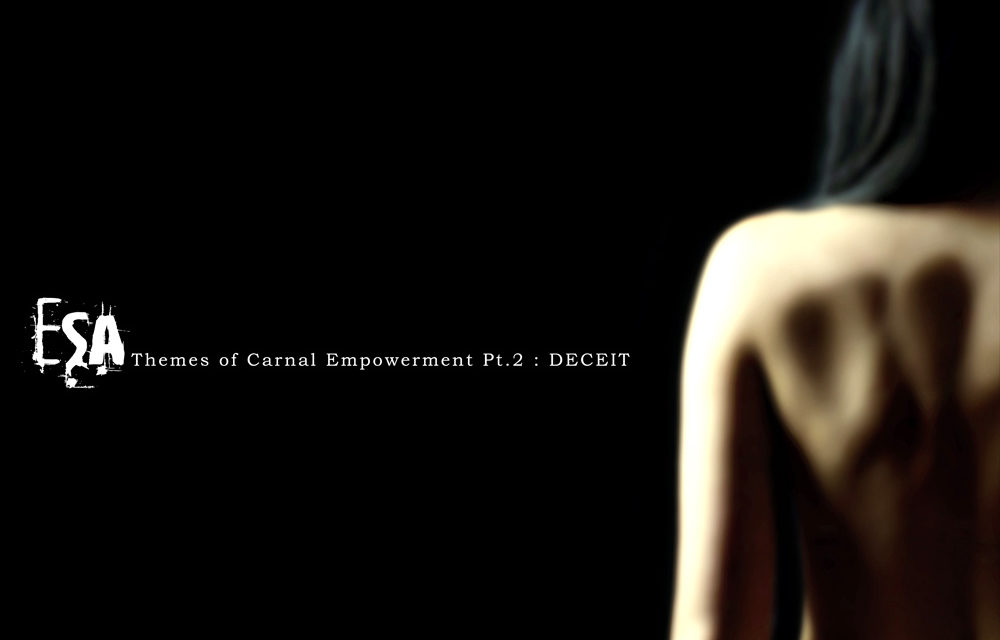 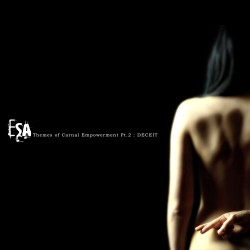 Rhythmic noise is often dry and sexless stuff, so making a couple of concept records about the darker aspects of our sexual appetites and experiences is undoubtedly something of a challenge. ESA’s first effort in the series, Themes Of Carnal Empowerment Pt. 1: Lust, worked for me in that it managed to abstractly portray the titular drive with Jamie Blacker’s standard palette of distorted beats and baroque atmospherics, climaxing with a few of the most intense songs the British producer has ever recorded. Despite that success I still had to wonder: would Blacker be able to do the same with a more cerebral concept like “Deceit”? The answer is yes, and although I think Pt. 2: Deceit is easily as good as Lust (and probably much better), it also asks a lot more from the listener, requiring some serious contemplation to experience fully.

Deceit is a story mostly told in the abstract, with only one discernible vocal from Blacker (on “The Heart is Marked” where his commanding voice is shrouded in effects to an uncharacteristic degree), most of the narrative being carried by samples and the actual ebb and flow of the LP’s eleven tracks. It’s an interesting gambit, and one with a purpose; by divorcing his subject matter from his own literal voice Blacker allows the material to take on a life of its own and be consumed by the listener without ties to any specifics from the creator’s own experience. In the liner notes to the record Jamie dedicates the album to “… all those who have deceived, been deceived and have resisted the urge that leads to deceit,” and I think that comes across, despite the disembodied voices of both men and women that inhabit these songs in the form of samples (many of which are openly contemptuous of the opposing sex), there’s a genderless, non-personified quality to the emotional experience it’s trying to suggest.

So what is that experience? Broadly it’s about sex and lies, and in practice that’s captured by the kind of pumping, gnarled and distorted beatwork ESA has always traded in. Early songs like “I Know Your Wounds” and “Breathing Through You” are long on the pounding drums and waves of static, and are good, but it’s roughly halfway through the LP, on “Devious Words” that Deceit really starts to take shape. Less of a come-on than the tracks that precede it, its deliberately programmed drumrolls break out of the 4/4 pound and into more complicated territory. There’s a suggestion of guilt and chagrin lurking within it, one made apparent by the follow-up “Deceit (The Sharpening of Shears)”, where the uncomfortable scraping of grainy textures against one another is punctuated by a keening female vocal and orchestral break, the album changing form to reveal something that’s been hidden behind the songs you’ve already heard. It’s a striking shift; beyond driving home the concept of the album it also retroactively changes the listening experience, with the unusually lovely and mournful opener “Let the Sinful Sparrow Sing” taking on an unmistakable air of menace on the second listen that didn’t seem to be there on the first go round.

There’s a weird inevitability to how it all plays out in the back half, with each song evoking the emotions the revelation of betrayal always brings. Blacker re-emerges with an indecipherable howl juxtaposed against sobbing moans and whispers on “No-One will Ever Touch You Again” (the shame of the victim and the abuser), followed by “If I Could Hurt You All Over Again, I Would” where the beats (anger) give way to a lovely vocal from Mahb Savage (sorrow and the sweet promise of false apology) before the two come crashing together in breathtaking fashion. “While You Sleep, I Converse With the Dark Birds” would seem to suggest a kind of catharsis in its sampled chanting and eastern percussion, but the twelve minute closer “Confudere” undercuts it: a structure that never quite coalesces even as it travels back through various modes the album has already touched on, the scars of the past and the wounds that never quite seem to heal.

Now here’s an important caveat: understand that all this is coloured by my own experiences as a listener and as a person, and that your take might well be different upon hearing it. Deceit demands that you inhabit it to appreciate it beyond the surface level of its artful production (which I certainly don’t want to talk down at all, it’s a great sounding record at each turn). By making us create our own context to appreciate it, Blacker also forces us to relate to it via our own lives, and for all its abstraction that also makes it incredibly intimate. It’s a fantastic effort from an already accomplished artist, and one that rewards personal interpretation and reflection. Recommended.