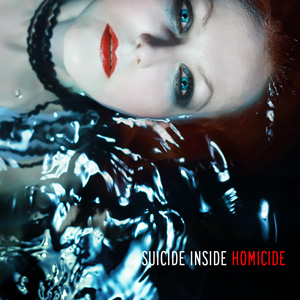 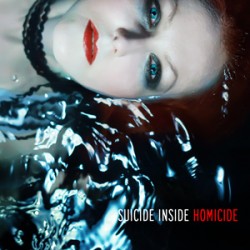 I think one of the most appealing things about Suicide Inside’s fourth album is the difficulty I have in classifying it. While previous outings from the duo have fallen further into vocal rhythmic noise territory, their new record Homicide is plying something altogether different and for my money, far more intriguing. The shadow of Alexey and Natasha Protasov’s main (and more well known) industrial-tinged digital hardcore project Ambassador 21 is certainly present, specifically in the use of breaks and samples, but those elements are used here in service of some decidedly quirky slices of what is nominally electro-industrial.

Punching up electro tunes with bits Frankensteined from other genres isn’t spectacularly innovative as creative outlines go, in fact I’d argue that it’s been a definitive element of the genre as far back as FLA sampling Slayer and James Brown on the same song. What’s notable about Homicide is that many these songs seem reverse engineered, built from the ground up from composite parts and hammered into the electro-industrial mould. The guitar sounds and breakbeats and agressive vocals from Natasha on “Razor” and “Call Girl” could easily be Ambassador 21 tracks in some other incarnation; what sets them apart from the Protasovs’ output in their other outlet is the space afforded in the mix to their bass and synth parts. On paper this sort of chicken and egg distinction (is it a breakbeat song with electro elements or an electro song with a breakbeat on it?) may seem arbitrary, but in practice it lends the album a sort of elasticity: a classic dark electro-banger like “Homicide” can sit right next to a sample freakout like “Power to Create Happiness” without either diminishing or diluting the other.

While much of the album sits comfortably in the aggressive pocket one would expect, there are some curveballs. The thick melody line that unrolls at the beginning of “Till The End Of Time” is quickly supplemented by four on the floor drums and an uncharacteristically restrained, almost sentimental vocal performance. It’s a nice song in and of itself, but in the context of a group more known for being about POWER RAGE RIOT DEATH at 180 bpm, it’s arresting. Equally surprising is closer “Say Yes”, an almost straight slice of italo, propelled by a decidedly funky bassline and string stabs, the occasional deployment of sampled guitar chug the only element to link it back to the rest of the record.

Given the Protasovs’ prolific release schedule and well-established style (both in SI and A21), an excursion afield could have fallen apart quickly. Homicide deserves some kudos for being well-crafted and constructed with care, none of that would matter as much if it wasn’t also a solidly enjoyable record, from soup to nuts. If pressed I might suggest that its best moments (the aforementioned “Homicide”, and “Til The End of Time”) are the ones which forego their most well-known sounds, although that’s not to suggest a weakness, so much as an unexpected strength. After the initial rush of each cut wears off there’s still plenty to engage with, and that’s enough to earn it a nod.