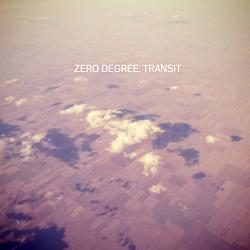 I picked up Probe, the third LP from German duo Zero Degree, on a whim after enjoying a compilation track or two, and have been enjoying its chill blend of downtempo rhythms and ambient waves for a couple of years. It’s a extremely unassuming record, never leaping into your ears and yelling for attention, but it does an effective job of slowly building hypnotic compositions by adding simple layer upon simple layer (check “Mamor“). A nice accompaniment to a mug of tea and a good book on a rainy Sunday if you catch my drift. Their fourth full-length appeared on Ant-Zen a few months ago, and it picks up capably from where Probe left off.

The core structures of Transit remain simple, but are perhaps ornamented with a few more flitting side details than its predecessor: tiny tics of glitch, rain, distant laughter. More intriguingly, some of the more developed new layers seem to unfold at paces wholly distinct from the core ones, creating a “polyrhythm in slow motion” feel. The cover art actually gives a good visual approximation of this almost phase-like approach: a broad, topographical view of the landscape one is passing over is complicated by clouds moving at different relative speeds.

If I had a complaint about Probe, it was that the component beats and pads remained a bit sterile if you focused on them too intently outside of the context of the compositions they were placed in; there was little to mark them as being the work of any one band in particular. Thankfully, Matthias Erhard and Bernhard Korth’s style comes into its own more strongly and distinctly here, and does a good job of walking the line of that ubiquitous (if perhaps vague) dichotomy in electronic music: is it “warm” or “cold”? While my untrained ears don’t detect much in the way of analogue synths, the pads are often wet and gauzy, perhaps calling to mind a light summer drizzle.

A couple of tracks do emerge sounding somewhat thin. “Halcyon” and “Quasar 2940” are decent enough, extremely mellow tracks, but after the nicely mixed marine sounds in “Until The Ocean Takes Us” and the rubbery beats and smooth pitch bends of “Stardust”, I couldn’t help but wonder if they’d have benefited from some additional textures. Fortunately, things end strongly with the processional nodding and understated arpeggios of “The Day We Left Everything Behind”.

Buoyed by the simple fragility of the likes of “Until The Ocean Takes Us” and the title track, Transit finds Zero Degree moving forward at a leisurely pace. Like Probe before it, it isn’t hellbent on wresting your attention away, but should begin to settle quite comfortably with listeners after a few repeat plays.