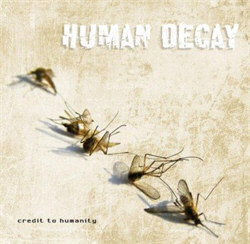 Active since the late nineties, but silent since the release of 2007’s Apology EP, Human Decay have returned in 2012 with a new LP, and a new label, having made the jump from Accession to Torben Schmidt’s Infacted Recordings. The Human Decay of Credit to Humanity is certainly different from the dark electro group of the mid-2000s; while their penchant for twisty arrangements remains intact, they’re in service of far more fluid, rubbery-sounding songs. Whether or not the change in sound is 100% successful is debatable, but the album does have a few standout moments worth discussing.

Perhaps moreso than anything else in their own catalogue, the record I’m reminded of when listening to Credit to Humanity is The Retrosic’s Nightcrawler. Much like the latter album, this is the sound of an electro-industrial band stretching itself out, and discovering what looser grooves can do for them. In practice that means we get a preponderance of programmed breaks and loops and basslines that come within spitting distance of funky. The best songs are the ones where Human Decay don’t let that new aesthetic detract from focused songwriting: numbers like “Decayed Thoughts” have a best of both worlds approach, a marriage between their old and new sound that feels organic rather than forced. Similarly, opener “Mad Wights” makes convincing use of a dubbed up bass sound and guitar that alternates between standard chugga-chug and more delicate melody lines.

When the band really hits their stride their compositions take on an almost live quality. Witness the acoustic sounding drums on “Dolls”, which roll the track through what amounts to a pastiche of ohGr circa Welt, right down to the tweaky analogue sounds and staccato vocal cadence. It’s certainly a high point both as a song and a proof of concept for what they’re trying to do, the same formula applied with slightly diminishing returns to “Handshake” and “Material”.

At fourteen tracks Credit to Humanity doesn’t gel entirely, and its scope ends up burying some of the better moments, an issue exacerbated by several forgettable instrumentals. What’s more, while every track brings something notable to the table sonically, it’s often in the service of an unmemorable song. Having listened to it some five or six times at the time of this writing, I’m still having a hard time remembering exactly which songs contained which sequences that grabbed my ear on each run-through. “Follow Me” has a neat dub breakdown for example, but for the life of me I couldn’t tell you what the song itself sounds like beyond that. My notes on “Alienate” tell me it makes interesting use of the futurepop sounds Human Decay have flirted with in the past, but minus a solid hook it feels like a pointless exercise, a bid for club play that lacks the most basic element required of it to fulfill that purpose.

I’m generally forgiving of groups who want to try something different, even when it’s not entirely realized there’s an appeal to bands in industrial who want to push themselves beyond their established sounds. While I’m not sold on Credit to Humanity as a complete listening experience, I can’t deny the band are putting effort into what they do. Trimmed down by a third and with a some more tinkering structurally there’s a good album in here, but as it stands it’s mostly notable for a handful of pretty good songs made by a group who have discovered a worthwhile vein to work in, but not quite how to mine it reliably.