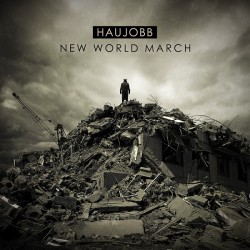 We’ve been giving New World March a sizable number of serious listens, as befits the first new LP in eight years by one of our favourite bands, who are in no small part responsible for our histories of critical thought on dark electronic music. We can perhaps only state three things with confidence at the other end of this listening process. New World March is distinctly, unmistakably a Haujobb record in every sense of the word. Not coincidentally, New World March is also good. Very good. Finally, New World March is incredibly difficult to write about.

Individual elements from the most recent Haujobb albums are all present (the precision of Vertical Theory, the incessant rhythmic immediacy of Solutions For A Small Planet, the abstract weirdness of Polarity, the smooth sparseness of ninetynine), and yet NWM doesn’t really sound like anything else in Haujobb’s back catalog (or Myer’s at large) when you start dissecting tracks and examining particular elements. Like we said, though, it’s immediately recognizable as Haujobb, which backs up Daniel and Dejan’s intimation in our interview with them that there’s an unquantifiable yet wholly unique quality to the work they do together, perhaps a more nebulous mood than a clear-cut style.

Speaking of mood, NWM‘s is established right from the jump by the foreboding plucked strings of “Control”, and remains consistently tense and uneasy throughout. New World March is the sound of a pot beginning to tremor and rattle ever so softly as water begins to boil, a quiet but unnerving warning that things are only a hair’s breadth away from chaotic eruption. It’s not until the climax of second song “Crossfire” that any of that pressure is allowed to be released in a blast of symphonic noise that washes away the disconcertingly dense arrangement of sounds that precede it. That kind of build and release isn’t necessarily new to Haujobb’s arsenal (many of Solutions for a Small Planet‘s highlights, like say “Anti/Matter” relied on it) but rarely have they leaned on it so hard across an entire album. Listening to NWM can consequently be a bit harrowing; more than once we’ve caught ourselves clutching our fists while listening to “Let’s Drop Bombs”, unintentionally caught up in its sense of automated dread. (As an aside, while NWM is an album with no shameless bids for club play, we’ll definitely be spinning “Bombs” out.)

The angular, propulsive discomfort of pre-release single “Dead Market” has proven to be an excellent barometer of the record on the whole, but it’s the image of Daniel & Dejan as greasemonkeys from its video that seems most representative of the album. Perhaps it’s the switch to a more traditional songwriting-demo-recording-mixing model of creation, but even for a band whose very name alludes to the intersection of the organic and the mechanical, New World March feels machine-like, every sonic element a cog or a gear in service of the workings of a greater musical machine. There’s a sense that each song is its own engine, with Haujobb as engineer-mechanics, building and fine-tuning their creations before letting them tick along of their own accord. A song like the appropriately titled “Machine Drum” exemplifies it perfectly, a precise and syncopated bassline providing a foundation for robotically precise strings to emerge, with Myer’s familiar baritone urging the listener to “follow the beat”. Similarly, the simple but disquieting bass-and-snare section of “More Than Us” hints at early Mute records (“Warm Leatherette”, “Ricky’s Hand”) while uncaring klaxons swarm above. Inhuman precision is the order of the day on New World March.

Still, even in NWM‘s mechanized landscape there are moments of release and relative tranquility. “Little World” is a beautiful track, even moreso in the context of the relative sterility that surrounds it. Uncommonly sentimental for a Haujobb song, much of its impact comes from the slight variation it makes on the album’s format. No less vigorously paced than the numbers that precede it, it’s looping synthline possesses a pronounced looseness, trading the build and release that characterizes so much of the record for a subtle and languid groove.

We mentioned the issue of dissecting songs and identifying individual tracks earlier, and that’s something which New World March seems to be inviting the listener to do. Individual sounds are spatially sequestered from each other, giving a feeling of vastness hitherto unreached in Haujobb’s catalog, and perhaps those of their peers as well. We’re wondering if this is what’s lying underneath some of the negative reaction to NWM we’ve heard – its clinical austerity can be unnerving in comparison to more compressed albums in which elements bleed into and mingle with each other. For our part, we’ve found the album’s spaciousness be completely compelling, but that disarming quality is also in part responsible for the difficulty we’ve experienced in writing about it. There’s probably a chemical or mathematical law that expresses the distinct yet interconnected nature of New World March‘s sounds elegantly, but don’t ask us. While such an approach could prove disastrous in the hands of less skilled craftsmen, for Haujobb it simply means no filler; no needless sound whose only function is to bridge other, more distinct sounds. There are precious few records which can convey a sense of unity while keeping all of their component parts so clear and distinct from one another. The Man-Machine and Violator come to mind (and woe to the critic who tries to explain what those records “sound like” or why they’re “good” in the space of a single review).

Steeped though we are in Haujobb’s legacy, it’s proven to be uncommonly difficult to parse New World March. While two weeks and a dozen listens is normally more than sufficient to form an initial impression of a record, we feel as though we’ll still be struggling to speak with confidence about this one even a year from now. Even taking into account ID:UD’s tendency to disappear down critical rabbit holes of our own creation, we would defy any writer worth their salt to concisely encapsulate it in the context of the band’s catalog and the greater genres that birthed it. This is about the point where we’d try to pithily sum up the listening experience with a few bon mots, but New World March has proven remarkably resistant to that kind of abridgment. Let our apprehension speak to the album’s inscrutable strength.