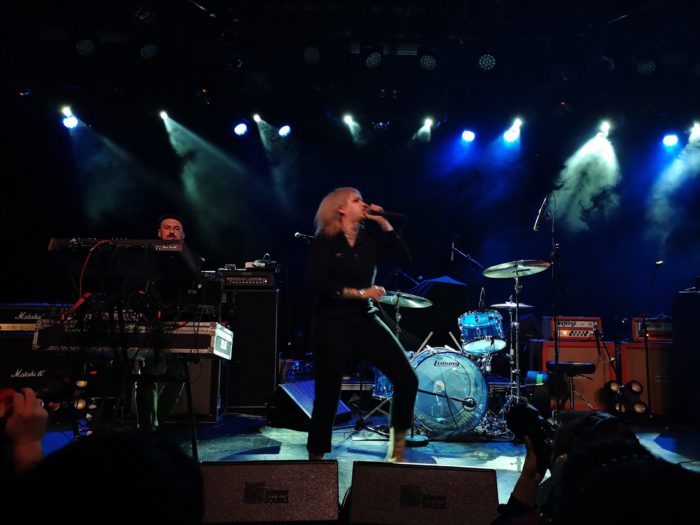 Hi friends. Hard to know what to write about it here – our normal MO is some kind of general update, but with everything being cancelled and us staying in our respective homes there ain’t a whole lot to report on. An important thing to keep in mind right now is that if you are a person with means who would have been out at shows and buying merch to support bands, is that you can still show love to artists who need it right now by supporting them on Bandcamp or elsewhere. Buy something you already have in another format maybe, or overpay on a pay what you want release. It’s not hard to do and can make a big difference for those artists and bands who are struggling with the current circumstances.

The mighty Youth Code on stage in Vancouver

Youth Code, “Puzzle”
A track that’s been making appearances in Youth Code’s live sets over the past year or so finally gets an official release, and while “Puzzle” clearly has one foot in the style of Commitment To Complications, it’s also pointing towards some intriguing new possibilities for one of our favourite acts around the HQ. The hardcore and metal influence Ryan and Sara have always brought to industrial’s still there, but the pensive pads which hold shape in the back of this track add some new shading to Youth Code’s fury.

Inhalt, “Commerce (Liebknecht Remix B)”
Shortly after the debut single from Matia Simovich’s Aphonia comes a new remix LP from his more well-known band Inhalt. Following up on 2018’s excellent Commerce, it features a murderer’s row of producers, including Rhys Fulber, John Fryer, Ulrich Schauss (!!!), Kontravoid, Kris Baha and numerous other producers of note. Have a listen to Daniel Myer take on the title track from Commerce in his Liebknecht MO, giving the track a slow boil and deep groove. Available now for preorder on Bandcamp, release on May 29th!

Panic Priest, “Lonely City”
The second taster for Chicago Darkwave project Panic Priest’s new LP is the ultra-smooth “Lonely City”. Marrying Panic Priest’s meticulous production sound with what is probably the best-written song we’ve heard from Jack Armondo, it shows how modern darkwave can reference the melodicism of the eighties without falling into overt homage. Definitely intrigued to hear the whole album now that we have a picture of how it differs from the debut.

M‡яc▲ll▲, “Slithering Social Engineering”
It’s been over two years since we’ve had any new music from M‡яc▲ll▲, practically a lifetime in post-witchhouse years. New EP Chiral seems to be consolidating the project’s recent focus on tighter sequences and glossier production, with tracks like this one taking up the proggier side of vintage electro-industrial. It’s been interesting to see how M‡яc▲ll▲’s able to maintain dense and trip-heavy atmospheres while moving away from the de rigeur lo-fi stylings that marked the project’s early work.

Phase Fatale, “Cursing Losses”
A fun 4 track compilation from Georgia’s KHIDI records yields new ones from Phase Fatale and Ancient Methods, as well as the debuts from new acts Roman and OTHR. Intended as a primer to the KHIDI sound, the 4 tracks each show a different aspect of the modern industrial-techno crossover sound, from the electro-industrial influence on OTHR’s “Damage Your Pain” to Romans’ rhythmic noise allusions. Ancient Methods and Phase Fatale are already well-established acts who do their thing here, with PF’s “Cursing Losses” coming across as especially spooky and foreboding.

Mesmer’s Ghost, “escape plan xi”
Here’s the first piece of work from a new act out of Peterborough (one half of the Senior Staff’s old stomping grounds). The two members of Mesmer’s Ghost have backgrounds in electro-industrial and drone, respectively, and both of those styles are coming together nicely in a track that has both grit and atmosphere, and a tastefully cinematic sense of pace. Will be interested in checking out their forthcoming full-length.