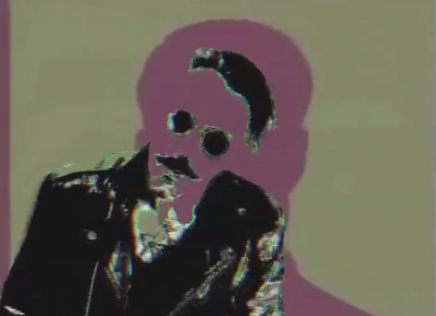 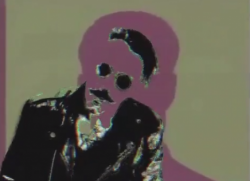 Mouth or mustache? You decide.

Friends, please join us in wishing a happy birthday to ID:UD’s most unsung fuzzy contributor, Intern Tobey! We celebrated by having a few friends around to the HQ, where rap music was listened to, vegan cake was eaten and copious microbrews were imbibed. The birthday boy seemed pleased, although he did spend an inordinate amount of time chasing a small foam ball under the couch and swatting at people’s feet as they walked past. The weekend wasn’t all parties and moderately priced domestic champagne: as always we found some time to dig for new songs that might be of interest to you, the reader. Check ’em out below!

3 Teeth, “Consent”
Their debut isn’t out until June, but no band seems more primed to tear 2014 limb from limb like 3 Teeth. We spoke about this at the end of last week’s podcast (which should go check out), but the LA based trio has done an amazing job of keeping their name out there and on everyone’s lips with a steady stream of videos and remixes, just enough to keep the hype cycle bubbling but not boiling over, and without giving away the whole of the LP before it sees its official date of release. That last bit is especially important; it’s remarkable when a band we pay close attention to can surprise us by dropping a video out of the blue with a totally different rhythm and sample based take on post-industrial. It’s gonna be a long two months to wait.

Venal Flesh, “Emulgent Disfigurement”
Worms of the Earth’s harsh EBM side-project has released their debut single via our friends at Juggernaut Music Group, and it’s definitely something a little different from the eastern tinged dark ambient and rhythmic noise Dan Barrett is known for. A-side “Emulgent Disfigurement” turns back the clock a few years, bringing back memories of Terror EBM’s early to mid-2000s era with harsh processed vocals and a busy arrangement that recalls the work of Tactical Sekt. The B-side “Mizbehi (Blood Of Angels Upon My Altar)” goes heavier on the atmospherics and textures with a taste of dark electro, reminding us of the terrific stuff Distorted Memory was doing circa Swallowing the Sun. Promising stuff from an artist we’re already pretty taken with.

Bombardier, “Hidden Razor”
Long-running hardcore/breaks/techno/noise/whatever producer Jason Snell, aka Bombardier, has just dropped an EP on Squarewav, the label run by David Christian of Cervello Elettronico. It’s a good fit, as Bombardier and CE share a love for the grindier end of rhythmic electronics, perhaps putting the lie to the narrative that the industrial/techno fusion we’ve been so excited about at the HQ is a new development. Regardless of camp or genealogy, the woofing stomp on this cut is undeniable.

Stoneburner, “War Of The Assassins”
Apart from the odd sample and namedrop, Frank Herbert’s Dune series and mythology doesn’t quite get the same love that other franchises (Alien and Hellraiser, say) receive within the industrial world. Previously, one had to wander wholly outside of it to find a concept album. Ego Likeness’ Steven Archer is here to fix that with Stoneburner, a solo project entirely dedicated to face dancer murder ballads and Fedaykin war hymns. While a limited CD run quickly sold out on presale, you can still nab a digital download.

Bestial Mouths, “Cloaked (Nightchilde remix)”
Terrifying modern-day darkwavers Bestial Mouths are getting set to unleash a remix LP, with entries from such diverse artists as WMX, Soft Metals, Funerals, B1TES and Nightchilde, whose track we’ve embedded below. It’s pretty different, taking the spastic, seizure inducing tempo of the original and moulding into a uptempo banger, sounding like what would happen if some other techno track were possessed by the disembodied spirit of the ultra-intense Los Angeles trio. One for your more adventurous DJs, and those who are curious what happens when a seizure shapeshifts into trance-like euphoria.