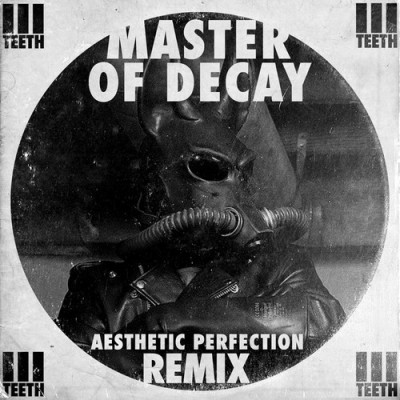 2014? For real? It’s likely a by-product of growing up on Front Line Assembly records and Cyberpunk 2020 sourcebooks, but can you believe that date when you see it on the calendar? Not that we buy into the old “Where’s my flying car/robot butler/jet pack” dross, but did you ever think the future would be cooler, maybe? Although come to think of it, so many of the things we associate with dystopian sci-fi (corporate rule, round-the-clock surveillance) are completely in effect. Hell, it even seems like the only people fighting back against a corrupt/powerless justice system are hackers and security experts. Regardless, we’re here, you’re here (thank you!), let’s find out what 2014’s gonna sound like. 3 Teeth, “Master of Decay (Aesthetic Perfection remix)”
Two of the most anticipated albums of 2014, at least insofar as the ID:UD HQ is concerned, are straight out of Los Angeles. Firstly, the debut from 3 Teeth, who’ve been priming the pump with a steady stream of leaks and remixes. Secondly, the latest from Aesthetic Perfection, who’ve teased a fairly major shift in style over the course of the last year, including some divisive (and catchy) singles. Appropriate that the two LA groups might join forces for a one-off, with AP lending some of their characteristic modern EBM styles to 3 Teeth’s gritty retro-futurist industrial. You’ll undoubtedly be hearing a lot more from us about both projects, consider this our first flirtation as we ease into the year.

Defence Mechanism feat. The Gothsicles, “Brainscan”
Speaking of team-ups, here’s a ridiculously appropriate one that dropped a little less than a month back: Ontario’s science fiction industrialists Defence Mechanism (aka Dr. Daniel X. Belasco and company) featuring your pals and ours The Gothsicles. A match made in heaven (actually in Calgary when the groups met and broke bread at the Terminus Festival), track itself is some bizarre confluence of Lovecraftian metaphysics, samples of 80s science fiction and the upbeat bounce that each band is known to bring to the table. Go snag the single off Bandcamp, and stay tuned for more news regarding each project in 2014!

Skadi, “Landet av Thursar”
Say, remember that peachy-keen in-depth piece on dark ambient our friend Danica wrote a month back? Therein she prophesied that unreleased and long OOP works from Germany’s Skadi would soon be being unearthed, and the new year has proven her right. Alongside 2004’s …and nothing remained, the previously unreleased Norrland LP has appeared on the project’s Bandcamp as pay-what-you-want releases. This frosty martial track’s almost enough to make us boot up Skyrim for the first time in a year.

XP8, “Inside Their Heads (V▲LH▲LL Remix)”
Over the holidays XP8 released a hefty 13-track remixes-n-outtakes companion to excellent concept LP Adrenochrome. We were impressed by that record’s capacity to deliver a cyberpunk narrative and expand XP8’s while still staying in the dancefloor hotzone, so Meathead’s Lost HD has certainly earned the right to be a more random collection of tracks. Random how? Well, how about our pals in V▲LH▲LL doing a super-slick and rubbery downtempo mix?

Gheists, “Wax”
We enjoyed the debut EP from Gheists (a side-project of Bee Teknofiend aka Mangadrive) but holy shit, we didn’t expect for new songs to start surfacing so soon and to show such a marked shift in sound. Them slow, trappy drums are still in full effect, but listen to the enormous digital space they’re underpinning here. This is the music that the Space Draculas rock on the bridge of their flagship when their armada drops out of foldspace to wage war on Earth. Hopefully this is just a sign of things to come, as we hear a band we liked already step it up considerably.