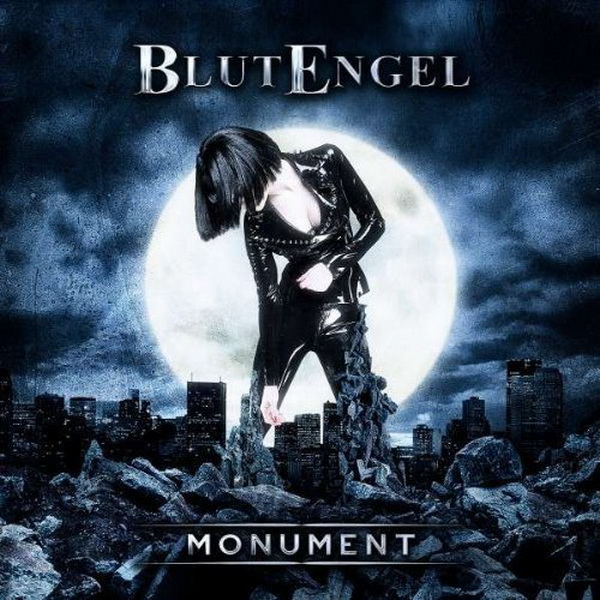 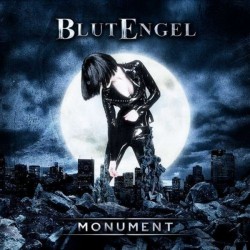 Blutengel
Monument
Out Of Line

Blutengel is a contentious topic around the ID:UD HQ. It’s not that we have a real difference of opinion when it comes to the quality of the music made by Chris Pohl and his cabal of vampire cosplayers; the senior staff concurs that it is competent, occasionally kind of fun, but ultimately too hokey to ever enjoy in a serious way. The divide really comes from the individual tolerances of your humble writers for their particular brand of silliness. Whereas I harbour a mild affection for their bloodsucking antics, Bruce finds them a bridge too far (despite the fact that he actively listens to bands like Nosferatu for god’s sake). I’ll cop to playing up my enjoyment of the group to troll my colleague, but I do feel like there’s something worth considering when it comes to Blutengel, namely that they are a fairly unique product of Our Thing (as well as being massively popular in certain corners of it). Beneath the massive schmear of White Wolf that coats every inch of their catalogue, is there really that much to differentiate them musically from any number of other acts from this end of the pool?

2013’s Monument might be the ideal subject for figuring that out. As their eighth LP, it’s a pretty pure distillation of their schtick. Said schtick, if you’re unfamiliar, consists of over the top modern day darkwave with amped up dance elements and the drama set to “Lestat”. It’s a formula that could only emerge from a few decades of club cross-pollination, the perfect mix for romantic goths who have developed a sweet tooth (fang? sorry, sorry) for the four-on-the-floor dance beats and big synth leads of futurepop and EBM. Pohl knows how to work that formula to maximum effect and when he really pours it on it’s hard for me to entirely deny the attraction. Songs like the ultra-catchy “Walk Away” and “Tears Might Dry” play up the theatrics to a ridiculous degree, and while Pohl and co-vocalist Ulrike Goldmann won’t win any awards for the subtlety of their delivery they’re both good at selling the over-the-top gimmick. And with production provided by expert studio hand Henning Verlage (Neuroticfish/Unheilig), the package is pretty impeccable as far as pop appeal goes, each element in the mix polished to a club-ready sheen. There are some out of pocket moments certainly (the addition of a dubstep breakdown on the otherwise inoffensive “All These Lies” for example), and I gotta admit that the E Nomine level bombast on “Willst Du?” is difficult not to smirk at, but I can objectively get why people with a certain sensibility like it.

…And that is what it comes down to, really. I can sit here all day and make jokes (*ahem* “I had to peel the red wax off the CD before I could listen to it. Chuck E. Cheese got a song-writing credit on this record. I heard they’re embarking on a world-tour of Wisconsin. This dude sweats brie and his music tastes good grated on some fresh pasta. The limited edition fan pack came with a fondue set.”), but it’s not like this band is trying to be something they aren’t. Blutengel is a schlocky band that makes schlocky albums, it’s true.Monument is no exception to that, but at least it’s marginally self-aware and well executed in that context. In a continuum that includes the aesthetic excesses of aggrotech and cybergoth, are Pohl and company really all that ludicrous? Well, yeah, I guess they kind of are, but they’re also one-upping a lot of the bands in those genres; “Lebensrichter” does the two note lead and big sweeping pad thing more competently than most terror acts can manage. Don’t get me wrong, I can lob all sorts of darts at this record – it’s tacky, the orchestral elements are ridiculously overblown, it trades in lyrical cliches – but it’s sort of immune to that kind of criticism, because it’s exactly how I imagine Chris Pohl wants it to sound. It’s not objectively good by my standards, but it’s not offensively terrible either, and it occasionally borders on fun. Can you ask for anything more from a Vampire-themed synth act?

Stepping back for a moment, I can recognize the flaws in that sort of reasoning, at best it’s an argument that serves as an indicator of the nadir we’ve hit when it comes to the quality of a lot of dark club music. I’m not gonna sit here and lionize competence over innovation, but I do think a record like Monument has some value as a historical document. It’s a distillation of sounds and styles that belong to us and are part of our legacy as a scene, whether we want them or not. You don’t have to like them, but we can’t entirely discount them either. For my own part, I can admit that although my pride will never allow me to really get on board with them, I’m comfortable allowing myself the occasional indulgence.