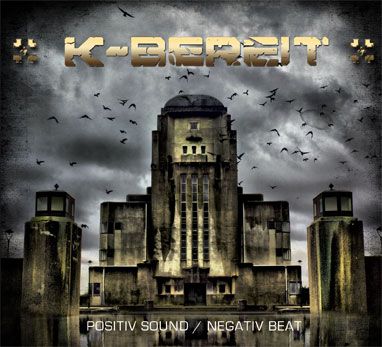 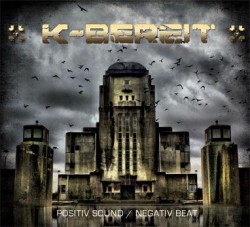 As half of Cobalt 60, Dominique Lallement’s work is definitively part of mid to late 90s electro; an industrial mixtape or compilation of the era would be incomplete without a track from the Jean Luc DeMeyer voiced project. Probably not a surprise then that Lallement’s current project K-Bereit hearkens back to the sound of that decade, albeit stripped down to a leaner, meaner iteration. The duo’s second album Positiv Sound/Negativ Beat stays in a single lane across its eleven tracks and three remixes, forgoing variety in its headlong pursuit of an aggressively single-minded aesthetic.

With the understanding that Lallement and his collaborator Fréd Sebastien are mostly interested in doing one thing, and one thing well, Positiv Sound/Negativ Beat has plenty to offer. The classic EBM tropes woven into their first release Distort Neural Unit are still riding shotgun here, although kept at arm’s length from the overall sound. Opener “Lesson One” is only a few arrangement choices away from being a new oldschool track, the four on the floor drums and distorted bass tweaked and distorted enough in the mix to keep them from taking on that subgenre’s signifiers. That trend continues throughout the running length of the disc, with “On the Way” and the Human Steel remix of “Lesson One” cleaving closest to full-on body music.

I’m reminded of Empirion and perhaps middle-era X Marks the Pedwalk in some ways when listening to the record, in that it finds a compromise between straight EBM and electro-industrial, minus the smoothed out techno moves of the former acts. There’s a leanness to the songs: while never thin-sounding they’re kept relatively simple, allowing the rhythm to do most of the talking with leads and Lallement’s vocals puntuating. The hooks aren’t what stand out, it’s the relentless pace of the album that makes the biggest impression on multiple listens. “Fist of Fire” and “Plug & Play” aren’t completely distinguishable from one another, but their push adequately makes up for any repetition in their structure. That said, the occasional curve-ball, such as the piano breakdown in the appropriately named “Start Running” proves welcome when it does appear. For all of their relentlessness K-Bereit seem to understand that in the absence of any counterpoint, just going forward hard and fast can quickly inure the listener to the power of the beat.

I could probably spend another couple hundred words drawing comparisons between K-Bereit and similar-minded acts (they have some of recent Portion Control’s snarling density, and fall in line with Autodafeh’s take on 242’s legacy) but that’s ultimately doing something of a disservice to Positiv Sound/Negativ Beat. For all the trainspotting, this is ultimately the work of one of a very few acts still exploring a specific and unique junction of various electronic sounds that happened some 15 years ago. The high points of the record indicate that there’s still some solid work to be done with beat-oriented electro-industrial; K-Bereit aren’t reinventing the wheel, but they’ve put a solid engine behind it and know how to drive it.