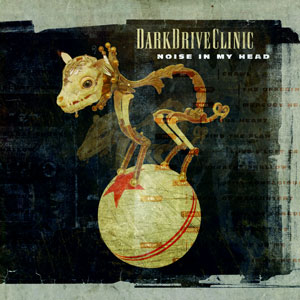 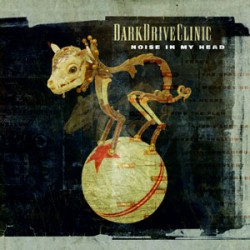 A record like Noise In My Head is bound to land in one’s stereo with a whole slew of expectations and preconceptions, some unfair. John Fryer’s credits as a producer are nothing short of staggering, ranging from household names like Depeche Mode and Nine Inch Nails to critical favourites like Wire, Ulver and Swans, as well as bands from across the goth/industrial spectrum from the early 80’s (X-Mal, Fad Gadget) to the present (Ashbury Heights, Rabia Sorda). Perhaps most impressive is his work as Ivo Watts-Russell’s chief creative partner in This Mortal Coil. The point is that with a production pedigree as deep, accomplished and as varied as this, it’s difficult to listen to the first record of Fryer’s own tracks without holding it to the high standards of his work as a producer on the one hand, while thinking of the sheer number of incredible songs to which that work’s been applied on the other. The former isn’t such an unfair metric, perhaps, and Fryer certainly acquits himself flawlessly with DarkDriveClinic’s production. When it comes to the far less quantifiable issue of the songs themselves, things get a tad trickier.

Noise In My Head is predominantly made up of lush, mid-tempo rockers which ooze atmosphere and are guided along by exquisite female vocals provided by Rebecca Coseboom. Think Collide, 12 Rounds, or Curve. (“Still Contagious” cops to such similarities, giving a lyrical nod to Curve’s “Ten Little Girls“) Fuzz, crackles, and scratches surround chugging guitars as Coseboom coos and glides along the tracks. When this formula works, as on lead single “Silhouettes”, it’s great, with Coseboom alternating between a woozy sweetness and propulsive aggression.

That said, more than a few of Noise‘s songs get mired in crawling tempos and minor keys. I realise that dark, languid passages are often the most promising canvases for layering textures and allowing subtleties of production to emerge and be appreciated, but linking too many of them together can allow that work to be lost in the wash. “Mercury Head” is a solid tune with a kick-ass chorus, but buffered by somewhat lesser tunes which sound similar, it becomes almost easy to miss.

On some songs there’s simply too much of the titular noise to allow the structure of the songs to stand on their own merits or flaws, and in general it’s the surfeit of guitars which is responsible for this. “Find The Flaw” adds a fantastic string arrangement midway through, but it’s given far too little time to develop and add to the song on its own; the chugging guitars return, filling the contemplative space provided by the strings with distracting (though technically flawless) adornment. There are also some beautiful sustained notes from Coseboom hidden underneath the fuzz at the song’s end which deserve far more of the spotlight than they receive.

Other tracks do veer away from Noise In My Head‘s formula to good effect. “Love’s Lost Cross” features a much lighter touch in terms of arrangement and layering and is stronger for it. “Still Contagious” drops the mid-tempo slinkiness and embraces the rushing speed which the immaculately granulated guitars seem to be calling out for. The summery “Bite My Tongue” recalls Curve at their most free and expansive, loping along gorgeously while Cosebloom oscillates between melancholy regret and carefree sing-song.

Much like an exceptionally rich dessert, Noise In My Head might be best suited to smaller portions. I can’t help but wonder if some of these songs would be afforded some more concentrated attention had Fryer opted to take another page from Curve’s book, and inaugurated his project by dividing Noise‘s twelve full songs amongst a string of 4-track EPs. There’s good stuff here, deserving of more time and space than it often gives itself.