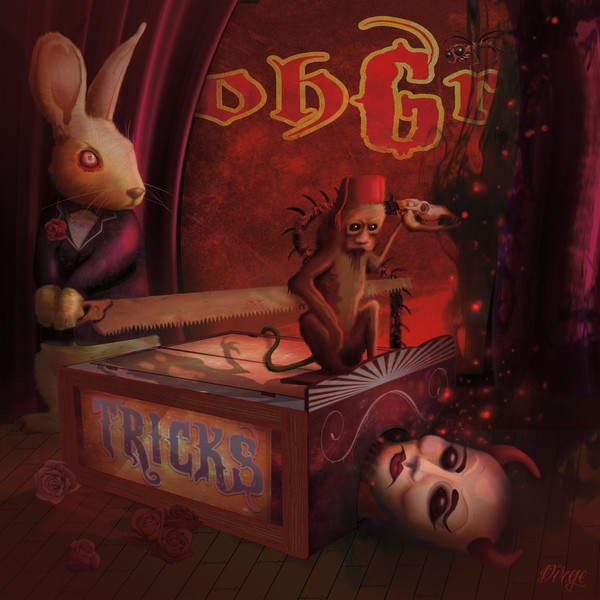 In Conversation is a feature in which the senior staff talk about a record we’ve been listening to. Not exactly a review, it’s pretty much exactly what it says on the tin: two music nerds having a conversation about an album with all the tangential nonsense, wild supposition, and hopefully insightful commentary that implies. This time, one of the grandaddies of post-industrial is back with a record that’s a little quirky, even by his standards… 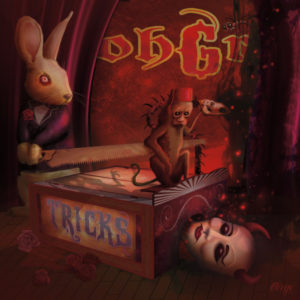 Sorry, needed to get that off my chest before saying anything else about Ogre and Mark Walk’s new one, their first since 2011’s pretty enjoyable unDeveloped. I’m being a bit glib, but I do think TrickS benefits from being listened to in the context of everything that came before it in Ogre’s solo career. The sing-songy delivery, the awkward, lurching rhythms, the overt whimsy of it all, these are all things you can trace back to Bedside Toxicology, and have even worked their way into his new work with Skinny Puppy. They’re expected at this point. It’s a little weird to think of anything Ogre does as being “comfortable” but that was honestly my first reaction to the LP.

So given that, how well does it do at being entertaining beyond pure familiarity? Pretty good, I think! If there’s a weakness to the ohGr catalogue it’s that many of the latter songs have felt like assemblages of production and performance quirks as opposed to, you know, songs (Devils In My Details is especially guilty of this). Ogre doing ohGr is always gonna be appealing because it’s Ogre and his charisma always shines through, but TrickS has a real emphasis on memorable and catchy songs and that’s honestly very refreshing.

Bruce: Yes, I’d certainly go along with that. The book on ohGr records is that they’ve always had a much more quirky and pop-oriented sound than anything in the man’s previous catalog (with the possible exception of the once-again odd duck out Devils In My Details). In spite of that, I feel that we’ve mostly been talking about instrumentation choices and the aforementioned vocal style rather than pop songcraft when it came to Welt or SunnyPsyOp. TrickS feels quite different in that regard. The choices in programming and sound design still have the brightness associated with the ohGr catalog and which was anathema to Puppy, but they feel wholly reinvented, rather than simple rehashes of the Welt playbook (more on that later, I’m sure).

But what really stood out during my first passes with TrickS was just how memorable and immediate the melodies and arrangements often were, often relying on straightforward pop constructions (rather than the somewhat more rock-driven focus of previous LPs). The vocal melody of the title track’s chorus was stuck in my head with just one play, and the dead simply synth harmonies behind it only cemented things. This isn’t to say there’s no craft or art to TrickS; just the opposite. If pop simplicity were, well, simple, everyone would be cashing in, obviously. The Information Society-style pulse and bounce of “Mind Made God” take no small amount of work and talent to cultivate into the thumping number that it is.

A somewhat loaded question, then: if TrickS is an album hinging on vocal charisma and deceptively straightforward pop songwriting, what (if any) connection does it have to the post-industrial landscape which Ogre helped to establish?

Alex: That is a loaded question, because I don’t think Ogre has ever really set out to be a part of any genre, especially not in his solo material. Like Welt feels industrial because it’s so recognizably Ogre, and we associate Ogre with industrial, right? I mean you can point at things like the samples on “Blowby” or the way the synths are arranged on “Resolute” and say yeah those are kind of industrial, but it’s not like I think there was any attempt to invoke the genre or anything. This brings me back to my original point: this is so unequivocally an ohGr record and I’m not sure any other descriptor means as much.

I want to touch on something you mentioned, the transition from the style of songwriting in his earlier solo career to this more “pop” style. Obviously the major difference isn’t in instrumentation – “Freaky” doesn’t sound especially different in terms of production or structure than his material from a decade and a half ago. It’s more in the emphasis across the record on these very instantaneous hooks and choruses. Like the title track just snaps into focus the moment you hear it, to the point where you sort of feel like you know where it’s going from the moment you first hear it. That’s not predictability, it’s songcraft. It’s a fun song because of the tempo and melody and production, but also in how it’s assembled to deliver those things as a complete package. It’s a subtle distinction but I think a noticeable one when you pay attention to the delivery.

That’s not to say that this is a light record by any means, although it is a nimble one. It has some moments that I guess you could call dark or surreal in ways that most radio-oriented pop music hasn’t been traditionally. You get much of a read on the mood of the record beyond it’s broadest moments?

Bruce: It’s certainly less overtly political than plenty of the project’s previous work and Puppy’s recent tours and records. Bit of a surprise considering everything going down, perhaps. But I think there is a running theme of deception and deceit, especially of the sort coming from inside the proverbial house. The title track’s clarification of the title’s meaning – “The mind plays tricks” – and “Mind Made God”‘s indictment of how easily we buy into racism and ignorance even when we’re not being directly prodded to do so all feel quite salient. I mean, hell, there are no Koch brothers or Russia or any other potentially nefarious agent you’d care to blame behind the re-emergence of honest to god flat-earthers in the twenty-first fucking century. What else can you credit a delusion like that to other than a perverse desire to lie to yourself and in doing so convince yourself that you’re being lied to by, well, everyone? Those sorts of mental gymnastics, with or without the likes of Trump acting as dopamine triggers, feel very much up Ogre’s alley (though there’s a good spread of classic Ogre wordplay castigating powermongers).

On another note, I’m still freaked out by the fact that ohGr’s now existed as a project for a couple of years longer than Puppy did in their original incarnation (something we may have discussed on our Welt commentary, I can’t recall), albeit with a much smaller discography. We’re definitely at a point where we have to view Ogre as being relatively long in the tooth as a performer and, as we’ve been talking about, somewhat set in an aesthetic, content to tinker with the project’s construction. I guess I’m dancing around the idea that Ogre seems very comfortable with ohGr. There’s nothing wrong with that whatsoever; I just have a tough time reconciling both the sheer kookiness of the project with its longevity (other cult acts like Sparks and Legendary Pink Dots perhaps come to mind, but they didn’t have the equivalent of Ogre’s pedigree when they started). Do you think ohGr loses something as a project as it ages or does the new album show that if an old Puppy learns a couple of new TrickS that’s more than enough?

Alex: I was wondering if you were gonna use that “old puppy, new tricks” gag before I could get to it. I don’t know if I can answer your question truthfully. It’s hard for me to even be objective about the man and his projects because they’ve been such constants in my life for so long that I can’t separate what they mean to me in the abstract from any assessment of the work. Obviously I like TrickS so I guess the best and most honest answer I can give is that I don’t think there’s anything here that would turn off anyone who was already on board with the project, and anybody new coming to the table is getting a good and pretty representative entry point. And hey, that’s great that Ogre and Walk could pull that off isn’t it? I suppose you could take the position of diminishing returns if you were inclined, but I think the listenability of the record makes that assertion a non-starter.

So yeah, here we are listening to ohGr in 2018 and it’s still weird and unexpected in the right ways. The future is of course uncertain, so we don’t know if we get more Puppy records, or when the next ohGr record comes out (the Pledgemusic thing for this one is heartening because it suggests the barrier to more material isn’t getting funding, it’s just whether he wants to do it or not). If TrickS is indeed an indicator or affirmation that Kevin Ogilvie is staying this course for the rest of his career, I think I’m pretty good with it. I’ll definitely be bumping a lot of songs from this for the rest of the year and beyond – “Mind Made God” and the title track are as good as anything he’s written since the mid-90s. ohGr the institution seems weird, but maybe that in itself is an appropriate way to parse the record?

Bruce: Yeah, he’s entering that rarefied air of charismatic oddballs who’ve been around long enough that the things which made them revolutionary now make them utterly charming. Waits or Alan Vega, perhaps? Though Ogre’s certainly wearing his age better than either. One way or the other it’s nice to be reminded that his fate and future are no longer one and the same as Puppy’s. With and without the band which first gave his distinct performative and lyrical style a broader audience, he’s found a project which has a life, aesthetic, and now well established history all its own. A new record by ohGr just has to be Ogre, and TrickS more than fits that bill.