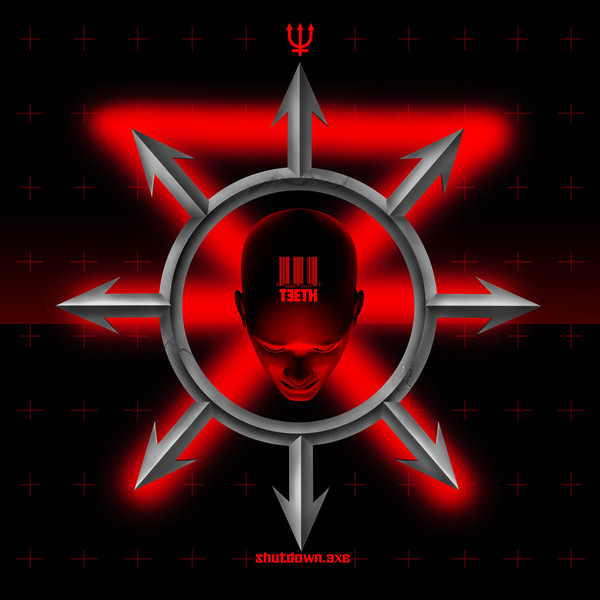 Was it really almost a year ago that we last did an In Conversation piece? In case you haven’t been with us that long, or have forgotten the format since we last invoked it, In Conversation is a discussion between the website’s senior staff about a new or classic release. It’s a nice informal (and usually pretty freeform) way we sometimes like to approach an album we have a lot of things to say about, such as the sophomore release from one of the most high profile acts to emerge from Our Thing in long time…. 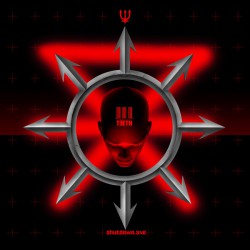 Alex: Okay, so first things first…I was genuinely concerned when I got wind that 3Teeth’s sophomore album was going to be more ‘metal’ than their debut. Not because I don’t like metal as a genre (I do!) or that I don’t like it when artists try new and different ideas (once again, I do!), but because I was worried that ‘more metal’ was code for ‘less interesting musically’. They wouldn’t have been the first band that sanded their edges down to broaden their appeal, and certainly not the first industrial scene act to do so. So I am very pleased that shutdown.exe doesn’t feel like a compromise in any way. Yeah, I think the guitars are very prominent and this is much more of an industrial metal record than the self-titled LP, but the things that first drew me to the band in terms of production and programming are still present and working for them.

And I suppose that’s the first thing that is worth discussing about the record; that it might be the most thoroughly modern industrial metal record I’ve heard in ages. If that sounds like a weird distinction to make, think about how long it’s been since any act worth a shit emerged from that particular rubric. We get so many promos labeled “industrial metal”, and a lot of it is just middling metal with a sprinkling of samples or keys. So yeah, I think it’s notable when an act with some momentum and some buzz make an effort to do justice to both sides of the equation from a studio and songwriting standpoint. There’s still a lot of mechanical soul in these songs, and they feel like a pretty natural extension of what the band has been doing since the outset.

Bruce: Yeah, I’d go along with that. The metal quotient’s been increased by some measure, but it also feels like it has a real and tangible connection to the particular rhythms and flavours which made the debut work. I also like the variety of metal stylings which have been woven in the second time around. The bludgeoning sludge of “Slavegod” and “Divine Weapon” almost make me think of latter-era Celtic Frost, which isn’t a comparison I ever thought I’d be making to any record we were discussing on ID:UD. Hell, even getting into the specifically industrial metal end of things there’s a pretty broad reach. I know it’s been a running joke between us (and plenty of others) that mainstream outlets’ coverage of 3Teeth and any other remotely industrial acts will invariably mention a shortlist of big names which often has nothing to do with the record at hand, but “Atrophy” is actually the first time a 3Teeth track has actually made me think of Nine Inch Nails.

The other thing that felt both familiar but broadened is Alexis’ vocals, both in terms of delivery and thematics. On the latter tip, while there’s still a real focus on how media and the broader culture produce and program the late capitalist subject, there also seems to be a deeper investigation into how the mind ends up producing and influencing its own processes and subroutines. We’re fairly accustomed to bands talking about resisting the dogma of the broader culture and staying true to oneself, but I like how that’s taken a step further here by taking seriously the question of how our own routines, the pitfalls of solipsism, and phenomenological limits can end up waylaying our attempts to come to an understanding of self, let alone of the reality which surrounds us. He’s also trying out a few new vocal deliveries, some of which (“Pit Of Fire”, “Away From Me”) I liked more than others (“Oblivion Coil”). Thoughts on how vocals, lyrics and general presentation of 3Teeth’s ethos are working on shutdown.exe?

Alex: No doubt Alexis is trying some different stuff vocally this time out, my favourite of which is probably the Manson-esque(!) weary sneer on “Insubstantia”. Like you say, not all of it works (I don’t mind “Oblivion Coil” but think “Slavegod” stretches him beyond his current capacity for screaming) but passages like the melodic singing on “Pit of Fire” is a good example of how he’s helping expand the band’s arsenal. I identified some of the same themes as you, although I think there’s also a thread connecting the idea of self-image defining reality now that everyone can curate their own public face as exactingly as they want. If you participate in social media then a lot of how you see things will be coloured by the individuals and corporations you’re exposed to daily, and there’s some keen observations (like on “Shutdown”) that make hay from how we can use that to flatter or make excuses to ourselves. One of the most notable aspects of 3Teeth is how they constructed themselves from whole cloth via the medium of social media, and so in some sense they’re uniquely positioned to question the intellectual honesty of doing so. It’s very them, in other words.

I’d like to take a minute to talk about the programming on the record. Chase Brawner’s guitars are absolutely given the spotlight on most of the songs, but I do like the programming and sound design that makes up the backbone of the songs, courtesy of Xavier Swafford and Andrew Means. They aren’t empty vessels to pile riffs and guitar chug into, but actual substantial composition that relies on production to define it. That’s a very 2017 idea in terms of electronic music composition, and I like hearing how 3Teeth apply it. Opener “Divine Weapon” is a really good example, the samples, the overdriven grit of the synth bassline and the eastern-tinged leads on it are more than just flavour; they’re the essence of the song. It’s ever more evident on “Degrade”, where the guitars are actually just mirroring what’s been established in the electronic verses, both in terms of what they’re playing and the specific tone and processing done on them. That actually raises another interesting idea I’d love your take on: are we falling into a rhetorical trap with this “guitars vs. electronics” dichotomy? Is there any effective difference in how this record treats synths and six strings as production elements?

Bruce: I guess that depends on the framework from which you’re approaching the record. I think, whether we’d like to admit it or not, as dedicated rivet-types we often place a premium on programming in records which have mixed instrumentation, and view the guitars as overlay, there for texture and harmony. Of course, if you’re a metalhead who’s coming at shutdown.exe after catching 3Teeth opening for Tool, that’s probably flipped. We could get into the particulars of this if/when we ever talk to the 3Teeth guys on record about process and the like, but that’d only refer to their specific workflow rather than how we listen to industrial metal in general.

One way or the other both elements are working in really close proximity to one another on the record. I wonder if, rather than trying to triangulate the metal versus industrial quotient of the record, we should be looking back to earlier, more psychedelic 60s and 70s rock bands who had keys and guitar sharing the load in the service of a particular sound or aesthetic which seems a bit apart or separate from the instrumentation itself. Wait a minute. Keyboards? No bass? Mystically-minded frontman? Are…are 3Teeth The Doors of industrial? I kid, of course, but 3Teeth’s success in communicating the idea or presence of their band as something that doesn’t just exist on records is a bit instructive. The particulars of the songs connote different musical ideas (am I the only one getting late-era Puppy from “Insubstantia”?), but the ethos of the band almost precedes them. That’s a pretty liberating gambit to establish for your band: anything we do fits on a 3Teeth record because anything we do is 3Teeth. This maybe explains the variety of sounds and styles we’ve already talked about, but do you think there’s a trade-off there in terms of albumcraft? Is shutdown.exe trying to cast too wide a net or are we judging it by the expectations of specific, niche genres the band’s capable of stepping over?

Alex: I don’t think so, if only because the record feels pretty cohesive in terms of its overall mood and structure. It’s not like, “take you on a journey” albumcraft, but good, solid, consistency in sequencing and mood. I’m listening to it from beginning to end as I write this, and I think it’s telling that the transitions between songs happen very naturally. Like each song makes sense in context. That does lead me to a point of criticism though; I think that the album is rhythmically very samey, and that does a bit of a disservice to it as an experience. Listen to any song in a vacuum and it wouldn’t be apparent, but the big kick-snare martial drums start to feel repetitive on multiple playthroughs. They work for the songs, but I actually really dig when they break out the hand drum sounds on “Tabula Umbra”. More variation in drum sounds and patterns is definitely an area of exploration I’d be keen to hear them pursue in future.

So here’s a thought: despite following the band since the first tracks hit Soundcloud, I honestly would never have guessed that 3Teeth would be where they are at the moment in terms of their trajectory and broader profile. I think it’s interesting to consider that for many of the folks who caught them at Tool or will see them with Rammstein, this is a potential point of entry into Our Thing. If that’s the case, what do you think shutdown.exe positions people for? This kind of mechanical rock music has traditionally been a real gateway drug (hello Ministry!), and I’m curious if you think it has the capacity to usher in some folks who might not have ever seen themselves listening to music this synth-heavy.

Bruce: Oh, absolutely. The fact that 3Teeth have their image and ethos might initially convince those folks that they’re legit enough to be on stage with those bands, but if they sit down with shutdown.exe and really lend it an ear they’ll be able to tell that, as we were discussing earlier, Xavier Swafford’s programming is just as integral to the record and just as heavy as the guitars. That’s something I wouldn’t ever be able to say about either of the legit stadium legends they’re touring with, and a big reason why, no matter how big they get, we’ll always be able to claim them as one of our own. It’s a great record to tour on and has one foot in the roots of classic industrial rock while planting another in the discordian, hyperreal wonderland which is 3Teeth’s spiritual home. Here’s hoping it carries their mindfuckery far and wide.