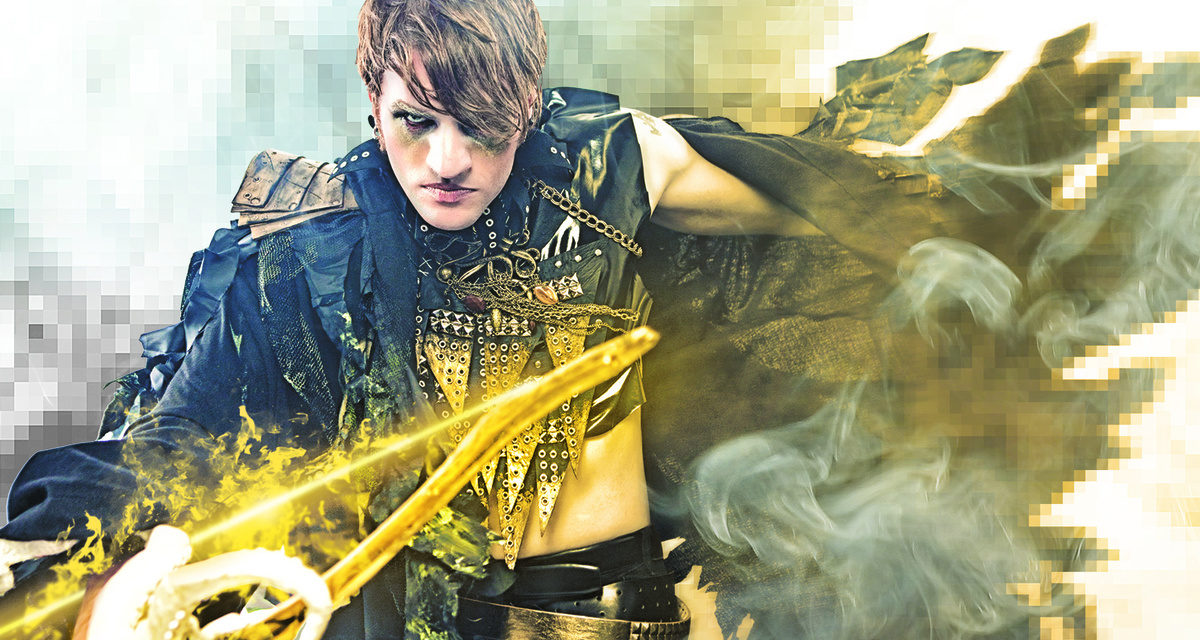 In Conversation is a feature in which the senior staff talk about a record we’ve been listening to. Not exactly a review, it’s pretty much exactly what it says on the tin: two music nerds having a conversation about an album with all the tangential nonsense, philosophical wanking, and hopefully insightful commentary that implies. This time we saddle up for another blast of Lovecraft and fart jokes with industrial’s lovable and Rev-ed up scamps, The Gothsicles. 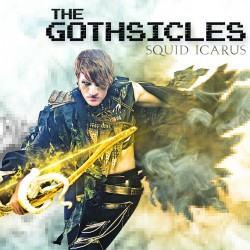 Alex: Man, have you ever tried to explain the Gothsicles to someone who isn’t steeped in Our Thing? I mean I feel like the video game and general nerd stuff has always been easy enough to get, but there’s something special about how the ‘Sicles (aka Brian Graupner if you don’t know) address our clubs, our music, our culture in their songs. It’s always gonna be one of the reasons I love them as much as I do, but I feel like the new record Squid Icarus is the most broadly appealing and least marginalized record they’ve ever put out.

The reasons for that are manifold, but I think the key one is that Brian is really tapping into a wider vein of geek interest this time around. Songs about video games, comics, all your key nerd demos aren’t anything new for this band, but this record is really putting ’em out there up front. That sort of thing can be really pandering and cloying, but in this case the stuff works mostly because it does sound like Brian is singing about stuff he likes. You got “Super Scary Action Figure” as the lead track for goodness sake, a reference to a semi-obscure controversy over a talking Venom action figure: not exactly your run of the mill nerd bait. Does any of that match up to your impressions of the record?

Bruce: Somewhat. I normally find myself having to google more than a couple of Brian’s esoteric geek references (a MagiQuest holler?), but even a comics agnostic like me was able to roll with the Venom and Moon Knight references pretty easily, so make of that what you will. Obviously the Cthulhu nods were completely my jam, but yeah, this does feel about as easy to get into as the Gothsicles are ever gonna be. Explaining the project’s ethos to people outside of the context of modern industrial club culture is still a bit tricky due to its sheer self-referentiality, but I think that’s also what lets Brian basically steal the show at nearly every festival which has a ‘Sicles set. People are already being deep-fried in all of the scene’s tropes and foibles, and along comes this manic screech of hilarity pointing out just how ridiculous the whole thing is.

Anyway, back to yr point about broad appeal. This definitely feels like the best transference of the band’s live energy over to record we’ve yet heard; I feel like you could play “Ultrasweaty” or “Black T-Shirt” (super obscure “Kids In The Hall” sample aside) for just about anyone with an interest in modern industrial and they’d actually be getting a pretty good sense of what the band’s about, not just in terms of fart and Lovecraft jokes (which Squid Icarus has in spades), but in terms of musical energy. Leaving aside geeky themes for a moment, what feels different musically this time around?

Alex: Production is stepped up certainly, with lots of contributions from various quarters. I don’t feel like the Gothsicles have ever suffered from really poor recording or programming in the past, but you can hear a major upgrade from their last record Industrialites & Magic to this one. You get guys like Tom Shear, Sami, Daniel Myer, Krischan from Rotersand, all of whom are experts on making industrial club records, and you’re gonna reap the benefits. That’s not to minimize Brian’s efforts at all: obviously the personality of the project comes from him and is what makes this sound like a Gothsicles record and not like a compilation of all those other guys’ bands.

I think the other thing that might help the album get over with a few people who maybe haven’t been fans in the past is the way Brian’s vocals are massaged throughout. Now you and I are both huge fans of his insane warble, but I know some people have just never been able to get into the band for that reason (oftentimes these are the same people who claim they can’t take the band seriously, as if solemnity is some sort of prerequisite to enjoying something). There’s still plenty of his vox where they count, on the storytelling jams like the Cyferdyne collab “I Sniffed the Glove” or “Cthulhu Fhartwagon”, but there’s other spots like “Drop Dead, Squidface!” or “Ultrasweaty” where they’re processed or mixed differently than we’ve heard in the past. It’s not so obvious a change that it’ll put off the established fans, but might be the branch that helps some holdouts come across. I dunno, what do you think of that assessment?

Bruce: Yeah, there’s a wider range of production on the vocals, and not just the addition of vocoder to “Moon Knight Is Still Cool” and “Ultrasweaty”. I’ll admit that on my first couple passes on speakers, some of the vocals sounded completely separated from the instrumentation, but I can’t replicate that experience on headphones, so who knows. Regardless, I think the real change-up in terms of both vocals and instrumentation has to be “Give Me One More Chance To Get The High Score, Then We Can Go” which has a millennial synthpop much more in keeping with Soviet than the ‘Sicles usual steez. Sure, it’s about a timeless topic Brian’s dealt with before (mucho sympathy to anyone else who ever bothered to grind all the way through “Rampage” only to experience one of gaming’s most unsatisfying “endings”), but it’s super fun to hear it taken up with a totally fresh musical coat of paint. “Sword Cane” also feels like it’s a change of pace, opting for a positively restrained garage feel.

That’s not to bury the lede: there’s a much stronger emphasis on club jams, many of which I feel would stand on their own even if you don’t “get” them. Sure, we’ve gotten mileage from “Nine Dudes” and “Save Dat Mermaid” in the past, but “Squidface”, “Ultrasweaty”, and of course the hella ironic yet literal “This Club Is Closed” seem consciously designed for the club floor rather than stumbling onto it by random (or by aping “Maps Of Reality”). It might seem like Brian’s tying one hand behind his back by sticking with references as obscure as Bloodlust Software and Half-Dragon, but that weird mix of the arcane and the immediate’s part of what’s always worked about Gothsicles releases.

On that note and back to your point about broad appeal, I wonder if we (and others) have overlooked the potential for The Gothsicles’ crossover potential to folks outside of the scene. Generally when we talk about crossover acts we’re referring to how part of a band’s aesthetic or sound isn’t wholly part and parcel of modern industrial, but while The Gothsicles are loaded with intra-scene refs and gags, I wonder if the fact that they’re not darkly howling about post-nuclear wastelands or their inner torment with po-faced solemnity might cause, say, the roommates of scene folks (or general people of the Internet) to prick their ears up when normally they might scoff at “death disco music”. Thoughts?

Alex: That’s interesting you bring that up, because I always feel like the whole culture of industrial club music probably looks kind of ridiculous from outside, but none of us can really gauge exactly how ridiculous because we’re so steeped in it. The Gothsicles sort of confront that head on by being like “Yeah, this whole thing is kind of silly, but that’s cool, we’re here to have a good time right?”. It’s not making fun of anyone or anything (although I think you get hint of self-deprecation in “Black T-Shirt”), but so few artists in the genre ever try to be funny that it’s always gonna stand out when someone is brave enough to go that route. Like we’ve alluded to it’s their greatest draw and the thing that will put some people off always. That’s just how a lot of gothicky people are calibrated I guess; not able to tell the difference between a band that has jokes, and a band that is a joke.

That kind of circles us around to the beginning here. I feel like the reason I like The Gothsicles is because they’re fun and energetic and have songs about stuff I find entertaining and clever. But, like, the Internet is fucking drowning in Star Wars raps and 10th rate parody songs that exist as blips in our social media consciousness; if that was the level the ‘Sicles were operating on, this record would be unlistenable. What I’m trying to say is that their schtick isn’t just about nerd references or name-dropping Peter Spilles or whoever, the music has to actually be good or there’d be nothing to grasp. Thoughts on that?

Bruce: Yeah, that’s the risk run by nearly every act which deals with any degree of comedy or humour in their mix, regardless of whether they’re a “comedy” band, from Weird Al to Sparks to Caustic: the music being thrown out with the bathwater along with the humour, which is all too often viewed as being disposable somehow. That latter concept’s well worth thinking about with regards to The Gothsicles: unlike all of those terrible Star Wars type “mashups”, the music isn’t part of the joke (“hahah, we’re rapping about stuff rappers don’t normally talk about, and it doesn’t matter that we can’t rap for shit because hip hop isn’t worth taking seriously”), and the whole shtick doesn’t just hinge on the punchline of the joke (which then wears thin). “Drop Dead, Squidface” and “This Club Is Closed” make me smile because they’re about things I like and can relate to (Lovecraft and trying to get people out of the club so I can pack up and be in bed by 4 am, respectively), but I never get the sense that Brian’s goal is just to make me laugh at every line and then move on. There’s a love for the flavour of music the band works in that’s shared between band and listeners, and even when the tropes of that music are the source of the chiding, it measures up to its standards. As always, huzzah for The Gothsicles: we’re a richer gang of goofs in black t-shirts for having them.