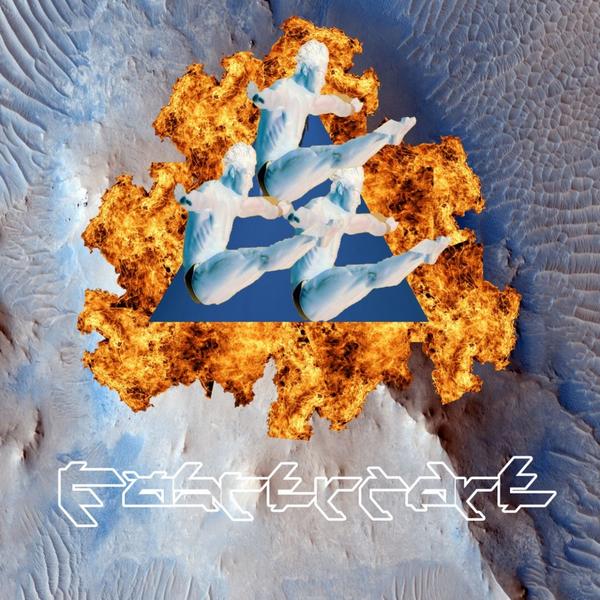 Bruce: I was pretty floored when I first heard “Zentai Scheme” a while back, and Altered Creature follows through on that initial shock (despite having come out before that track – the fact that this record apparently came and went in April with nary a peep on our radar is weird, and maybe something we can talk about later). It’s miles away not only from the very hip-hop mode of witch house Fostercare first came out with and showcased on Second Thoughts, but also any and all of the styles and moods we’ve heard from “post witch house” producers after they move away from the genre’s core roots. As I think I said when I was first listening to it, Altered Creature feels very much like what Future Sound Of London might’ve sounded like if they emerged in the 2010s rather that the 1990s: large swaths of the techno landscape cut up with backhoe and stitched together in a colourful bricolage. Our resident curmudgeon Matt Pathogen dismissed Altered Creature out of hand due to its cribbing of psytrance passages, and he’s not wrong; those bits are there, but there’s plenty of EBM under the hood, too. (Were I a few cocktails deep at a party and given to making slight over-exaggerations, I’d say that “Future Tribes” could be only a chorus away from being an Icon Of Coil track.)

Alex: Yeah, the sheer range of the material released under the Fostercare moniker is pretty astonishing. I suppose it’s not uncommon for a comparatively new project to still be trying out new things, but whatever he puts his hand to – be it a psy-trance or breakbeat jam or what have you – has a very distinct character to it. I was reading an entry on his artist blog in which he talks about wanting to make music like The Knife, Salem and Burial when he started out in 2007, and to be frank that sounds like one of those “great in theory, terrible in execution” recipes. So the fact that he sort of effectively synthesized that stuff along with, like, a million other sounds and ideas and is still audibly progressing, even over the course of a single record is totally interesting.

It actually puts me in mind of a conversation we had with Réal [Cardinal of Comaduster] recently where he said one of the most exciting things about music right now is the number of young producers who are emerging from bedrooms all over the world who have grown up with access to DAWs and are already incredibly proficient with them on a technical level. It’s the all too often ignored flipside of the whole “anyone can make electronic music now” coin, which is usually a complaint about the number of crap projects formed three minutes after they downloaded FLStudio for the first time. Like, if the price for getting to watch these prodigal artists get to develop right in front of us is having to ignore a bunch of less talented and dedicated people, well, that’s kinda the history of art in some ways innit?

Bruce: Yeah, increased access to means of production is going to result in a deluge of crap, but Sturgeon’s law is pretty stable. We’re back to “The Work Of Art In The Age Of Mechanical Reproduction,” as always. Fear or mistrust of the perpetually cresting wave of Young Turks and their tools and methodologies is an eternal force in art and culture, but it’s also reactionary conservative bullshit which should be resisted by people who are legitimately fascinated by a particular form of cultural expression, and not just a particular era of it. I often wonder if the older folks who complain about the effects of media-saturation and instantaneous access to the sum of human knowledge and cultural production on younger generations have actually talked to a smart teenager in the last ten years. While their frames of reference are radically different, they’re way more informed and receptive to new ideas than we or our parents were. Any young person today with a thirst for learning or creativity is miles ahead of where someone of a previous generation of equal innate ability or intelligence would be as far knowledge bases and toolsets go, and that’s fucking rad.

Anyway, back to the album at hand. I feel like it perhaps shares some DNA with Gatekeeper’s Exo. The primary focus in both cases seems to be on sound design and 90s techno motifs more than the atmospheric and groove-based priorities each artist had previously demonstrated. But while Exo took me a long time to get a handle on, Altered Creature was an immediate neck-grabber. I’m not sure if that’s because the leads are just more insistent or that it’s more beat heavy. I seem to remember that you weren’t hearing the Gatekeeper similarities when we talked about Altered Creature earlier, but that it did jump out of the speakers at you in the same why. What do you think it is about this record, or at least its sounds, that seems to be hitting the spot for us right now?

Alex: That’s tough to pinpoint, although I think it has something to do with how fast each song gets set up hook-wise but also in terms of general atmospherics. So you get this kinda push-pull where on the one level your brain is processing both the immediacy of each song but also these interesting production choices almost unconsciously. Does that sound pretentious? Maybe, but take “The Empire Will Drain U” for example: it’s like “Age of Love” being played in a haunted spaceship, and you get that right from the jump, it doesn’t meander at all in setting itself up. That’s what the whole record is like, these very easy to “get” songs that unfold really organically as you listen to them. It’s times like this that I wish I still smoked weed, because this is the sort of album I would put on after burning one, and then stay up all night reading comics to when I was a teenager. Like say, Dead Cities to take it back to your FSOL comparison.

Speaking of Future Sound of London, how much do I love the way Fostercare uses breaks on this record? A whole bunch, that’s how much. When they get deployed against the vocal cut-ups and manipulations on “Welcome World” or in the last half of “Sleepless” it lends this really crisp, classic sensibility to both songs that tickles me just so. That’s part of the record’s appeal too, the feeling of these older electronic music tropes being seen and applied by a fresh set of hands. Like, as opposed to these artists (many of whom we like!) who do their best to replicate older sounds and styles with vintage gear, Altered Creature is much looser and more elemental, a cherry-picked assortment of different 90s sounds. Here’s something that just occurred to me: do you think there’s even a trace of witch house on this record? Like beyond, “City of God”, I don’t think anyone would ever peg it as having anything in common with it beyond the healthy doses of reverb unless they knew the history of the project already.

Bruce: As a brief aside, good call on “Age Of Love”. Apop’s Welcome To Earth was running through my head as well, but yr completely right to trace it back to the actual 90s source. Anyway, yes: “City Of God” is pretty much it for me as well as far as clear WH markers go. After being intrigued and dazzled by “Empire” I’ll admit I was a bit disappointed by “City” on my first pass through the record. I was worried that the rest of the LP might be full of the same draggy beats and drones (albeit very well-produced ones) I’d heard from Fostercare before and wouldn’t deliver on the promise of “Empire”. Clearly I needn’t have worried. Fostercare’s clearly moving forward away from the initial explosion of weirdness which birthed him and so many others, and I couldn’t be happier.

I wonder if a few of these threads – the apparent lack of long-term promotion of Altered Creature, the DAW fluency of younger producers, and the lack of witch house in play – are in fact connected by the acceleration of mutation and evolution within musical genres. To paraphrase that old sage William Gibson, in some ways it feels as though we’re living through an experiment in musical Darwinism, designed by a bored researcher who’s keeping one thumb permanently on the fast-forward button. Without any gear or software-based barriers to impede them, producers can experiment with, refine, release, and then move on from whatever new forms and assortment of elements strike their fancy at a given moment. If you’re not interested in making another “traditional” witch house record, why would you? No one’s delusional enough to think there’s any money to be milked out of this genre by not messing with the formula simply because there was no money in it to start with. Once the record’s out there, move on to the next thing rather than resting on yr laurels, which Fostercare seems to be doing by talking up his forthcoming Eden II release rather than flogging Altered Creature. Guess that’s up to aging slowpokes like us.

Alex: It could be a jumped-up cycle of creation or it could just be Marc Andreottola’s own energy as an artist. Maybe both. If you peruse his website he has a million different things going on, self-made short films, a novel in the works, all kindsa different endeavours. I have no idea how old he actually is (I’m gonna guess mid-twenties?), but I think part of my perception of Fostercare as being this very young act is just how much and how many things he’s involved with. Who knows if his writing or his movies are anywhere as accomplished (or even comparable) to the stuff on Altered Creature, but hell, if you have a platform with nearly infinite potential on which to put this stuff out, why wouldn’t you?

All digression aside, I think half of the enjoyment of listening to this record has been digging into what releases like it signify beyond just the music contained on them. There’s so many different things to think about it, it becomes easy to attach a lot of significance or influence to it that may be totally off-base, or at worst wishful thinking on the listener’s part. I think this kind of speculation isn’t proof positive that the record is good, so much as the fact that it made us actually inspired us to think about and discuss all these ideas. That’s pretty much all I could ask for from a release like this, it’s good to be able to recommend it not only as just a fun listen but also as something with some conversational value. Good stuff, be eager to hear what his future releases sound like.

Altered Creature is available via Bandcamp and on CD and 12″ vinyl.