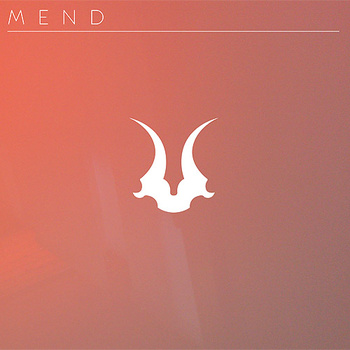 This taster EP from Chicago IDM duo MEND carries something of the bittersweet about it; it’s been issued as an interstitial release while the band try to remake material recorded for their debut LP which was lost to theft just as it was nearing completion. In the face of this undeniably shitty turn of events, though, Kassi Cork and Max Glascott have rallied and sent out a tight package of four warm, evocative, and elegant tunes which will no doubt help to whet appetites for that eventual full-length. Falling somewhere between the cozy bedroom garage of Sepalcure and the dusty spacescapes which Displacer’s been rendering for the past few releases, this bit of work from MEND impresses and quickly endears itself.

I’m not enough of a gearhead (or any of one, truth be told) to hazard a guess as to what parts of MEND’s sound are analog and which are digital, but the tone of the leads on these tracks alone make this record stand out. Whether they’re bending or being struck with precision, they pulse with an inviting vitality and provide a guiding thread throughout the differing song structures explored here. On “Test Landing” the melodies woven by those leads bloom then collapse, advance then retreat, changing direction like wind, while percussive sweeps shift in and out of focus.

While made up of many of the same components as “Test Landing”, there’s a much more strident, almost martial sense to the way “Neighbors” develops, with rhythmic and texturing layers adding to the near-stately mood, while the core synth pattern endures. “Unfamiliar Ceilings” has a minimal but mischievous bounce that almost makes me think of The Knife, before a barrage of skittering drums and filters crash the slinky party.

Things close with the simply gorgeous “D’Eje”, which begins as a pure homage to Satie’s most delicate impressionisms on a solitary piano, before subtle pieces of Moogish harmonization begin to appear. A piece which doesn’t pale standing next to Aphex Twin’s “Avril 14th” (not a comparison I make lightly), it not only ends the EP wonderfully, but also changes how one approaches future listenings, as the more classically rooted elements of MEND’s compositions come to the fore. Articulate, rewarding, and highly recommended.

This EP can be purchased by donation from Bandcamp.