Morning all! I’m cobbling this week’s quick checklist of new material the morning after having belted out Numan’s “We Are Glass” at a particularly awesome karaoke party. I’m not sure that this has anything to do with this post, but I’m still kind of buzzing on how awesome it was to get to karaoke a tune by the site’s patron saint that wasn’t “Cars” (for those curious, the ID:UD staff’s karaoke standards are “Run To The Hills” and “Ignition [Remix]”). Anyway, enough of that silliness, let’s get to the business at hand.

Douglas McCarthy, “Hey”
The new solo joint from the Nitzer Ebb frontman’s been in the works for a while, and the video for lead single “Hey”‘s just gone online. Featuring production from long-standing tech maven Mark “Blakkat” Hall, it’s a dusty, minimal bit of moody tech house and a great showcase for McCarthy’s vocals.

And One, “Shouts Of Joy”
We’ve already talked a bit about “Back Home”, the lead single from the regrouped incarnation of And One’s forthcoming S.T.O.P. LP. While that cut recalled “Wasted”-type cheekiness, new single “Shouts Of Joy” is pure bombast, and quite possibly the most Depeche Modish track Steve-Dave & co. have ever released (I’m hearing “Master And Servant” and “Never Let Me Down”, Alex is catching whiffs of “People Are People”). Between these two album tracks and the oddly self-referential peripheral pieces “Shice Guy” and “S.T.O.P. Was An Inside Job“, the pump has been primed for S.T.O.P. to be a much ballyhooed record upon its release.

White Car, “The Factor”
I’ve enjoyed the EPs the LA-by-way-of-Chicago duo White Car have dropped over the past couple years, and their debut LP, Everyday Grace takes their intriguing fusion of electro-funk and early EBM into even weirder territory: the sample-happy, pitch-bending attacks they levy against their own core structures kinda remind me of Severed Heads. If you dig //TENSE// and Gatekeeper and fancy a more scrambled take on retro electronics, this is a record worth checking.

miserylab, “Tomorrow For Us”
Man, recent global unrest, and the particulars of its expression in London specifically, has really lit a fire under Porl King’s keister. Despite having just started up a new project, he keeps churning new miserylab stuff out, like this characteristically dour track (gotta love that gloomy guitar echo). Check the video and grab the mp3 for free.

IMPAKT!, “We Own The Night”
A new Finnish act rocking some emotive synthpop steez with some EBM beats. Debut LP Imperia drops in June on EK Product. 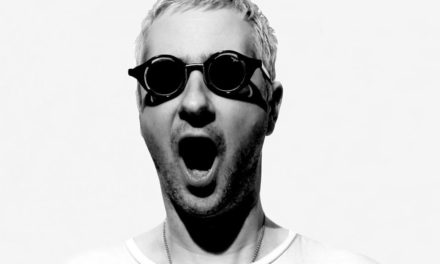