On the topic of Peter Hook’s Side Projects

As ID:UD’s resident New Order pedant and general aficionado of Factory related ephemera, I’ve paid for more than my fair share of crummy NO related side-projects and solo records. Indeed, if you’re looking for a sucker who bought, and is willing to discuss at length the relative quality of The Other Two’s Super Highways (it’s overlooked!) or which Electronic collaborator was the most suited to completing the Sumner/Marr/? trifecta (Karl Bartos, duh) I’m your man. And of those mostly mediocre records, my personal favorites are those of Peter Hook, a dude who follows his own muses, usually to the kind of effect that only nerds like me can appreciate. I fully understand that almost none of the music we’re about to discuss is notable except for the fact that the guy who played bass on the storied Joy Division and New Order discography made it. Hell, I only bought it because I’m that much of a geek for the minutiae of those bands, and to Peter Hook specifically. So set some expectations: the music we’re about to look at isn’t brilliant, but there’s some gems in there if you’re willing to squint a bit. Come have a gander with me, won’t you?

Revenge
The first disappointment comes in the form of Revenge, Hook’s project formed in the wake of one of many fallings out with lifelong best friend/mortal enemy Bernard Sumner during New Order’s end of the eighties hiatus. Their first album One True Passion actually isn’t much of a departure from New Order’s 1989 record Technique, in that it’s a rock/dance hybrid taking some influence from the acid and balaeric sounds that were bubbling from Ibiza back to Manchester. That said, it’s a much less charming outing than Technique due in no small part to Hooky not being the best frontman. Turns out the gruff magnetism that made him such a great personality in New Order wasn’t enough to make up for his flat vocal delivery and lack of well, hooks. Indeed, with the exception of second single “Pineapple Face” and the bouncy “State of Shock” from the Gun World Porn EP there isn’t much of note in the band’s discography.

Monaco
Similarly, Monaco was okay, but not great, composed as it was of Hooky and latter era Revenge member David Potts. They produced two albums, 1997’s pretty okay Music for Pleasure and 2000’s forgettable self-titled release. They do however have the not inconsiderable distinction of recording what is bar none the best track any member of New Order has released outside that project to this day, the insanely catchy “What Do You Want From Me?”, a blast of danceable pop-rock replete with Sha-la-la’s and a sweet vocal from Potts on the chorus to offset the Beast’s slightly polished but still rough around the edges verse. Seriously, I could talk about that song all day, and have. But if you don’t know it, probably best that you just listen to it right now, it’s about as good as things are gonna get in this neighbourhood. If you’re still curious afterwards, “Sweet Lips” and “Shine” from Music for Pleasure both ape New Order to pleasing, if derivative effect.

Freebass
Freebass was/is made up of Hooky, Andy Rourke from the Smiths and Mani from the Stone Roses, all bass players, playing bass together in a group. Hence the name. It’s inoffensive, less-than-the-sum-of-it’s-parts sort of stuff, although the songs sound fine, they never really grab you in any way and I actually had to dig pretty hard to come up with a highlight to play for you (“God Machine”, linked below). In fact, post the departure of Andy Rourke from the line-up the most notable thing about the group was Mani freaking the fuck out on Peter via Twitter for having a wallet “visible from space” due to it being filled with *ahem* “Ian Curtis blood money”. I guess they’ve made up since, but who knows if Mani is back in the band, and hey, what’s a high concept band with three bass players do when there’s only one bass player left? Side note: If The Other Two ever record an album with Morrissey I’ll be the first dude in line for it, terrifying a thought though it is.

Man Ray
Not so much a side-project as a couple of tracks assembled by Hook and collaborator Phil Murphy to promote the Haçienda nightclub revival The Factory. Their two tracks are “Tokyo Joe”, a fun but insubstantial rocker and “Ways of Making Music”, which is straight up ACIIIIIIIIIIID (house). Not bad, but likely for fans and Madchester enthusiasts only.

Peter Hook and The Light
I can’t even leave my damn house without seeing the cover for Unknown Pleasures on someone’s t-shirt these days, so I guess it was only a matter of time before one of the surviving members of Joy Division saw fit to say “me too”. Hence Peter Hook and the Light. Aside from covering Unknown Pleasures in it’s entirety in concert, the group has recorded an EP of JD covers 1102/2011 including a completed version of the unfinished song “Pictures in my Mind”. A lot of people have done a lot worse exploiting that band’s legacy, so I guess I feel like hey, if Hooky wants to go down that creative road who am I to judge? Their version of oft-visited classic “Atmosphere” features Rowetta (ex-Happy Mondays) and is lovely and soulful and well worth your time.

BONUS:
I actually really dig this collab between Crystal Method and Hook from the former’s Divided by Night album.

ID:UD’s Dozen: Acts You Should Know 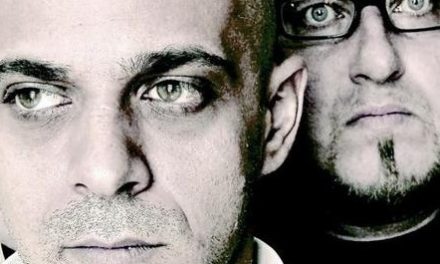 A Rough Guide To Haujobb