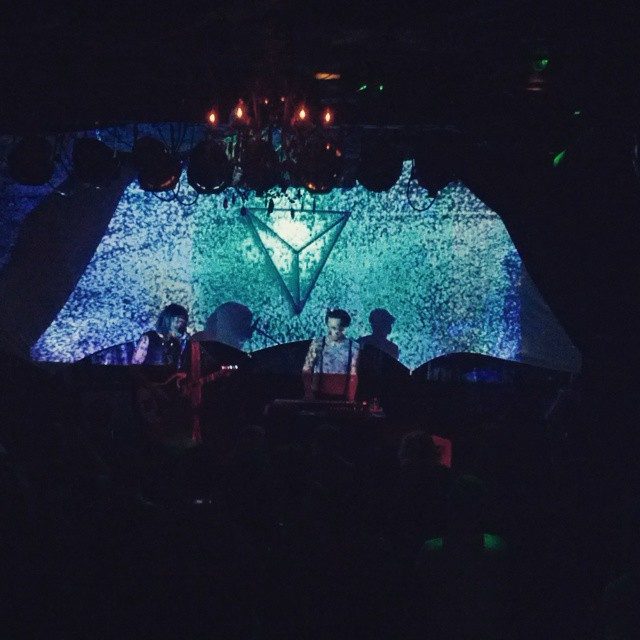 Hey friends, thanks for stopping by! Our official four year anniversary isn’t actually ’til tomorrow, but we celebrated in style this past Friday evening with a real fun party at the Hindenburg here in Vancouver. We had a blast playing some tunes new and old and chatting with friends (including some from out of town: shouts out to Michael and Wes from Talking to Ghosts), and also taking in sets from Vancouver’s own Flowers and Fire and Animal Bodies. Both bands went hard, and we gotta offer our thanks to them for letting us ride their coattails for our little birthday celebration and to our friends droste^v for hooking up some amazing visuals for the evening. Big thanks to any of y’all who came out, and we’ll hope to be doing something for the five year as well. Keep in mind, you still have a couple days to get in on the giveaway of one of our “Death to False EBM” shirts, entry for which can be had by simply sharing one of our articles on Facebook or Twitter and tagging us in the post. Look to the site for a more general anniversary post tomorrow, and in the meantime have a listen to this week’s roundup of new Tracks! 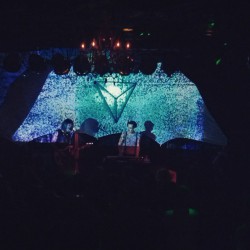 Architect, “Snow (Demo)”
So, story is that this particular demo from Herr Myer’s Architect project was actually intended to be part of the soundtrack for an unfinished documentary about German snowboarder Silvia Mittermüller. We’re suckers for any and all musics heralding from the DM camp, but our expectations are particularly high for new stuff from Architect; Mine is still in both of our rotations, and darn if this number doesn’t convey some refreshingly frosty sensations just as the weather here in Vancouver has turned to the uncomfortably warm. New album announcement on the horizon we hope?

Wulfband, “Allergie”
Gory freshness from the people behind 2014’s most over-caffeinated release. Wulfband continue their Swedish/German hybridization of EBM with a cut from a forthcoming three-track CD from Progress. Everything about the band that makes them so uncanny is in play here, namely the unmistakable mix of trad EBM structures and just slightly quirky production, all delivered with impossibly manic energy.

Luminance feat. Kristoffer Grip, “Testamente”
Belgian wavers Luminance have Kristoffer Grip from Agent Side Grinder stop by with some of his trademark gravitas for this track from recent EP Wait. Seeing as the most recent ASG (which we enjoyed quite a bit) was a bit more on the melancholy tip, it’s good to hear Grip do his vaguely sinister thing here, especially where Luminance have that analogue electrowave so locked in. Rest of the EP is pretty nice as well, maybe give it a listen and then check for their new LP in the fall.

Force Publique, “Excess”
The newest tape from Portland’s Force Publique (who’ve been gigging with the likes of Animal Bodies, reakt[ion], and Metal Mother) is scratching an itch for witchy shoegaze we didn’t even realise we had. Grimy yet entirely nostalgic and anthemic, we’re keen to dig into the rest of Bloom, which hangs a sour re-framing of The Sundays and Pumpkins on trap walls. Wait a minute…is this what Salem thought they sounded like?

DJM REX, “13 to the Power”
If you didn’t check the first EP from the collaboration between legendary voice of EBM Douglas J McCarthy and Los Angeles modular synth maven Cyrusrex, y’all might be surprised by the experimental vibe of this track from their soon to be released second extended play, now with engineer extraordinaire Ken ‘HiWatt’ Marshall added to the fold. A club track it ain’t, but listen to that sound design; this is some real musical noise from some dudes who are about as qualified as anyone on the planet to be working in the field. Be interesting to hear if this is an outlier or just a hint of where these guys are taking things.

Stendeck, “Tonight Is Forever”
It’s been a long, long four years since Stendeck’s Scintilla. Quite frankly, no one does technoid or IDM like him, delivering a widescreen pulse worthy of Michael Mann and a difficult to pin down sense of melancholy inseparable from his anthemic style. Finally, the follow-up is here in the form of Folgor, and our first passes suggest the wait was worth it. Lush, immediate, and distinctly alien, this promises to be a masterclass in mood and arrangement.