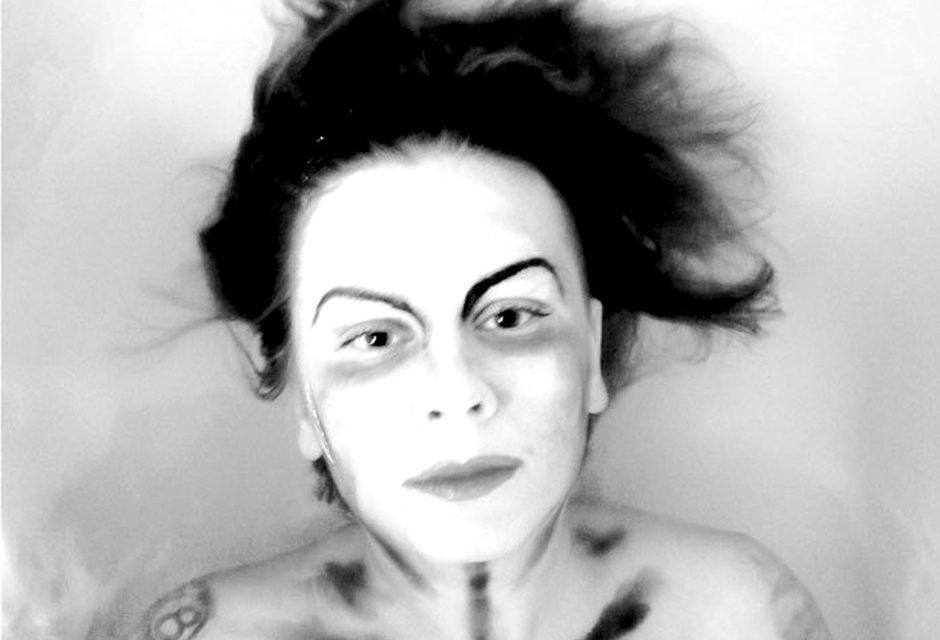 In Conversation is a feature in which the senior staff talk about a record we’ve been listening to. Not exactly a review, it’s pretty much exactly what it says on the tin: two music nerds having a conversation about an album with all the tangential nonsense, philosophical wanking, and hopefully insightful commentary that implies. This time we’re digging into the first LP proper from that band fixated on Vikings and reverb, V▲LH▲LL. 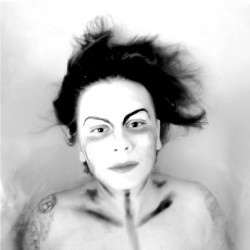 Bruce: Having now had over two years to hone their aesthetic, V▲LH▲LL are still a tricky bunch to pin down. Anonymous and crafty, they’re just as happy releasing songs that reference the Teddy Bears Picnic as they are undead Vikings, just as happy to work on pulsing, shuddering club numbers as strings-only suites. On the first couple of passes Leaning On Shadows feels like it might be their most even-keeled release. It has some of each of the aforementioned elements (including the nightmarish teddy bear picnic of “Down In The Woods” which is no doubt still keeping Scott Thompson awake), sometimes separate but managing to keep things from getting to fractured, sometimes combining all trace elements of their sounds, as on “Bortom Fjäll”. Without getting into discussion of who the people behind V▲LH▲LL are, do you think that Leaning On Shadows gives a newfound sense of what V▲LH▲LL is as a project? True, that idea might have something to do with the fact that this is by far and away the lengthiest non-split release they’ve done, but I still feel like this is giving us a sense of terra firma we didn’t have before.

Alex: Sure, I’d agree with that. For a band that was associated with the whole implosion of witch house (which gave us way more interesting music on the whole than witch house itself ever did), V▲LH▲LL have always been musically mercurial. You can hear elements of industrial, neo-folk, neo-classical, dark ambient, all kinds of goodies in what they do, but this is the definitive statement of who they are, and it’s not necessarily an adjunct of any genre they draw from. I guess the closest thing you could liken them to would be like Saltillo (or maybe latter era Ordo Rosarius Equillibrio if you squint a bit), but more importantly, they’re kind of just themselves and that’s super cool to hear if you’ve been tracking them since that first split with M‡яc▲ll▲.

So yeah, Leaning on Shadows is actually a really good full-length that plays up all the stuff we’ve liked about the project for a while. I’ll admit I was really curious about whether they could pull it off, partially because they’ve never released more than a few originals at a time, and partially because what they do is so high concept (“Viking Scandy-Synth with occasional nods to contemporary pop music” is outré any way you phrase it) that you sort of forget how substantial their work actually is. Like yeah, it’s super easy to focus on something like the sample in “Down in the Woods” or the evil chanting in “Satanic Ritual Abuse”, but, V▲LH▲LL makes those numbers work as songs. They manage to keep the conceit of the project from totally outshining the actual music is what I’m getting at.

So speaking of that, what do you think the big selling point of this record is to a new listener? Like yeah, it’s good and it’s dark, but what would be your elevator pitch if you wanted to get someone to check it out?

Bruce: Not to sound too vague or general, but I think the fact that V▲LH▲LL have become this very kooky band with a specific set of cool and brooding moods without being beholden to one genre, as you said, merits the attention of anyone with a more than passing fancy for dark electronic music. “Warped” is a word that came to mind a fair bit while spinning this. I don’t mean sick or perverse or anything, but warped in the sense of strange, unpredictable bends and waves that form in wood that’s bee left in the rain too long, or overused cassettes. For all we talk about how “dirty” or fucked-up early tunes by, say, Salem or Ritualz were, that witchy sound from nearly half a decade back (yeesh, time flies) often felt as though grime and distortion was being dropped onto tracks in a one-size-fits-all manner, without much thought as to how that production did or didn’t suit individual pieces (then again, production and composition pretty much took a back seat to a reactionary and clearly defined atmosphere on those tunes).

However V▲LH▲LL started out in the wake of that aesthetic, it really feels as though they’re now picking and choosing from its elements only when it suits individual pieces, and drawing on an impressive toolbox of textures and motifs (like the genres that you mention). There’s a “weird” feel to V▲LH▲LL’s work here (ie, “weird” in the case of weird fiction, that catholic ur-source of genre fic), where there’s more focus on adding drama to their poetics (and again, anything from teddies to draugr are on the table) than cultivating a particular, identifiable sound.

I’m beginning to wonder how many of these elements we’re talking about have been in place in the band’s work from day one, but just haven’t been as apparent to us (as dogged as we’ve been in pursuing them) because it’s been presented in short spurts, and, again, was often digested in tandem with M‡яc▲ll▲’s work. Structurally, how’s Leaning On Shadows sitting with you as a full-length listen?

Alex: Quite well I think, largely because for its range. There’s the idea that album craft isn’t necessarily about making everything sound the same so much as it is sequencing things so they flow naturally and don’t give the listener a chance to get bored; this album is put together that way. Like, I don’t think the genuinely amazing opener “Einhärjar”‘s strings and distorted male and female duet necessarily sound a whole lot like “Hours”‘ wobbly bass and codeine-trap drums, but they exist nicely on the same LP together. I think there’s something to that “weird” feel you mention as being the album’s real golden thread, running through each song’s twists and turns from the beginning to the end. It’s kind of indefinable, but you know it when you hear it. Maybe the biggest thing about this record is almost an intangible, V▲LH▲LL’s special sauce if you will.

Okay, so this is kind of an odd line of inquiry, but one I’m genuinely curious about. One of the genuinely coolest things about this project has always been their drag remixes of pop artists, like that Lana Del Rey bit I was totally obsessed with for like six months. Now as much as I think that stuff is part of their DNA, you can’t really put a Waka Flocka mix on your album proper, but I think I still hear some evidence of that sensibility at play on their originals like “Water Harp” and bits of “Vägskäl” (and “Down in the Woods”, but that one’s a gimme). Kind of an interesting transition, as artists move beyond the legal no man’s land of limited or digital pay what you want releases into proper LPs and have to adjust their style to suit the format. Am I imagining it, or is it actually nestled into this record in various spots?

Bruce: Yeah, everything’s being switched around with enough frequency to keep you constantly engaged. As for the question, are V▲LH▲LL jackin for beats? I definitely don’t hear any specific passages which seem to be consciously imitating existing songs or artists, nor any original parts which seem to be positioned as if they were sampled. That said, there’s definitely a stronger sense of pop and melody on this release, which might just be what yr noting in “Water Harp”‘s moves at chillwave. The fact that the production on each track varies so much could also be contributing: so much of what makes a sample sound like a sample, or what makes us jump on specific drag remixes is tied to clashing or varied production and mixing, and like we’ve said, there’s very much a melange of that going on here.

Given those slight poppy moves amidst more familiarly murky V▲LH▲LL waters, I feel like there’s a real chance for this to be a breakout listen with a slightly wider audience than the band’s built so far. Take into account the fact that it’s a full-length (and not a split with “another of those newfangled bandnames I can’t pronounce”), plus some club play via “Towers Fall” and “Bortom Fjäll”, and you have a good shot at getting this record into some fresh ears. I’m not saying it’s gonna be the juggernaut that Fearless turned into for Artoffact, but I do feel like this is a hot property. We’re starting to wind 2014 down; how’s this sitting with you as far as this year’s contenders are concerned?

Alex: Oh golly, I don’t really know about where I would slot it in terms of all the other stuff that has come out this year, that’s a mental exercise I save for mid-December. I would agree wholly that it has lots of good crossover potential though. we’re still riding a surge of interest in goth and industrial stuff that isn’t really tied to the trad scene, and a record that draws from the “oooh so scary” tropes while still remaining accessible could do quite well with both a hardcore and more casual audience. It’s a really good album, and I feel like you can enjoy it as this fun spooky thing or really dig into all the genre signifiers and such.

So yeah, big thumbs up for Leaning on Shadows. It’s a versatile LP and pleasant to listen to and walks a fine line between taking itself seriously and not stifling itself with the weight of V▲LH▲LL’s schtick (and I’m using that term lovingly). If folks wanna know what the legacy of witch house is, here you go: new dark music that doesn’t adhere to any specific template but speaks to variety of traditions while not adhering wholly to any of them. Not shabby for a triangle band, eh?