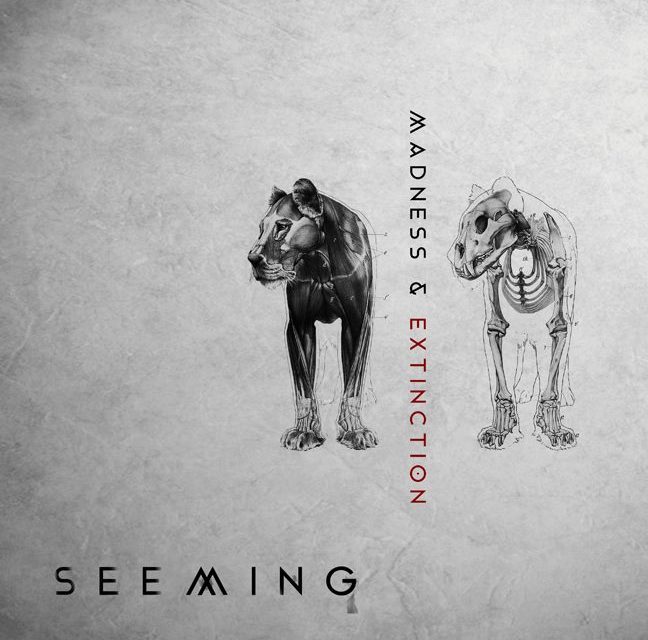 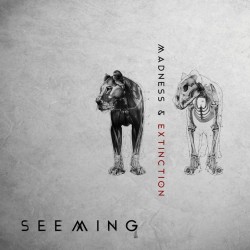 It’s not easy to figure out where Seeming fits into Our Thing. While the scene credentials shared by the duo are impeccable (both Alex Reed and Aaron Fuleki are late of cult-darkwave act ThouShaltNot, and last year Reed published Assimilate: A Critical History of Industrial Music), the music on their debut isn’t particularly industrial, or gothy for that matter. The cheeky description entered into the bio-section of their Soundcloud profile, “post-human / post-gothic / post-political / post-dance” seems more and more apt the longer you spend with them; you could spend a few thousand words just trying to encapsulate every musical shift, every lyrical turn contained on Madness & Extinction. While we’ll keep things somewhat briefer, there’s no question that the combination of sounds marshaled on the record, coupled with its unflinching and irreducible subject matter have placed Madness & Extinction in exceedingly rarefied territory in 2014.

As you might expect from the title, this is an album about the end of everything we know. That probably makes it sound like a downer – and make no mistake, there are moments on the LP that are breathtakingly sad – but what makes it so compulsively listenable is that for all its first person accounts of humanity’s final moments, it’s neither a wallow, nor a dispassionate series of observations. Reed’s examinations of some theoretical Armageddon are entwined with a fairly heavy philosophical question; at the center of the record is the unnerving question of what happens when our time as a species has passed, and what our legacy will be when the candle is finally snuffed out. That you can address that idea without glossing over its implications or lapsing into total nihilism is revelatory, as Reed intones on opener “Eyes of Extinction”: “Will I blend into the water of surrender?/And be truly truly gone in annihilation’s splendour?” VNV Nation have danced around this line of questioning in their most intense moments, but rather than treating such thoughts as passing musings, Reed takes them up as a primary theme. Themes of destruction and annihilation are certainly nothing new in Our Thing, but to find an expression of them that’s this lyrical yet fully-realized you’d typically have to hop over to William Blake or JG Ballard (but more on that later).

There’s a fearlessness in Seeming’s methods of exploration, certainly in the make-up of the songs and the ways in which they’re presented vocally. In our interview with him, Reed noted that he thought of Madness & Extinction as a pop record, and there’s certainly something to the album echoes the omnivorous appetite of popular music for instrumentation of production style suit the song. In its most accessible moment, the melancholic “Goodnight London”, Seeming pair an almost whimsical telling of world cities being wiped off the map with a lovely piano and synth arrangement that builds to an explosion of modern rock drums that wouldn’t feel out of place on any current day radio anthem. Similarly the pleasing bass and guitar arrangement of “Beautiful for the Last Time” could lull you into forgetting the uncomfortable suggestion of its title.

That these arrangements even have space for Reed to fit all his words into them is something of a miracle. As a lyricist he hides complex ideas in simple couplets, building them up into much larger, and more philosophically complicated narratives. The piano ballad “Convincing” contains so many ideas and feelings, guilt, loss, treason acted out as a form of self-flagellation, self-insertion (in context the line “Alex can’t you hear us/Don’t sail past” is utterly chilling) and still others in its three minutes and forty five seconds. If its twists and turns (and those of relationship-in-decline tale “New Year” or sweet post-apocalyptic ditty “Welcome to the Sun”) are meant to be taken as some kind of parable instead of a literal narrative Reed isn’t telling. For all the drama and intensity of his words, his singing never quavers or crosses over into theatrics.

And then there’s “The Burial”, Madness & Extinction‘s show-stopping centerpiece, and a tune which has only further cemented its place in our thoughts and playlists since we first heard it. Set atop a percussive trot which can’t help but connote “Running Up That Hill”, Reed recites a litany of innocents and criminals, sins and virtues, and consigns each to the same inevitable fate: “God will bury you/Nature will bury you”. There’s nothing new about the socio-politically leveling implications of the memento mori, but Reed depicts each of these injustices and glories not so much as individual deaths but as collateral damage in a great, green overturning which waits for none and will absorb all. There’s no single revelation or redemption to be found in this cosmic mulching, nor is Reed even bewailing this inexorable process (“I’m not angry/I’m not sad/I’m just stating the fact”), he’s simply bearing impartial witness. As alluded to above, this fixation on not so much what is lost, but the mechanics of the force which causes these incidental annihilations holds much in common with the apocalyptic fiction of that perennial industrial touchstone, JG Ballard. Of course, high-falutin’ lyrical aims and hanging in the same thematic department as “Ozymandias” doesn’t count for much by itself on what, like we’ve said, is often a pop album at its core, but musically “The Burial” is firing on all cylinders. After establishing an austere and martial feel on the opening verse, it takes only the slightest shifts in the vocal melodies and some light synths to flip things into a straight-up killer of a chorus which hints at as many 80s dancefloor hits as it does dour neo-folk numbers. Put simply, this is one of the best songs we’ve heard since we started I Die: You Die, full stop.

As showcased on “The Burial”, with Madness & Extinction we can have our cake and eat it, too (even if it might be our last meal). The pop construction and instrumentation with which Seeming is frighteningly adroit blends perfectly with the connections to Reed and Fuleki’s musical pasts. While sticking to a unified group of lyrical concerns, Reed finds so many different structures and moods with which to address them that the record’s (admittedly grandiose) thematics never feel overbearing or ponderous. A strong album of the year contender, we sincerely hope that Madness & Extinction finds the audience it deserves, within or without the landscape of Our Thing: people willing to listen and think. That might be a tall order (and if so then perhaps Seeming’s thesis is well proven), but we assure you: the rewards this record offers for careful consideration are magnificent.